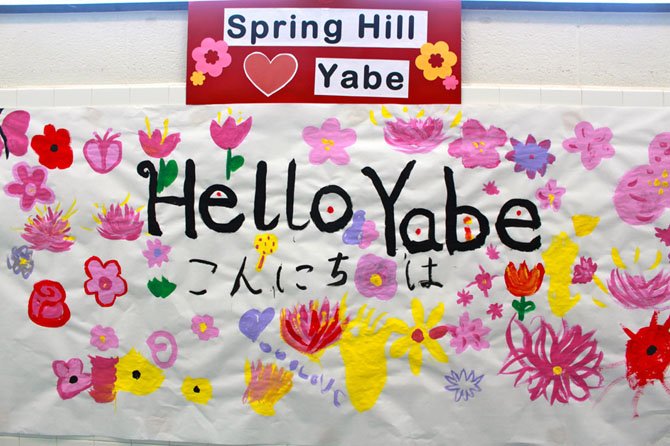 Hundreds of signs welcoming the Yabe Japanese foreign exchange students were plastered all over the school. Photo by Reena Singh.

Friendship is a transcontinental experience.

That is what Spring Hill Elementary students learned during a cultural and vibrant friendship ceremony with a small group of Japanese foreign exchange students on March 27.

The morning ceremony welcomed the students to the nation’s capital with song, dance and hundreds of pictures drawn by Spring Hill students.

"In this world we live in, we need more person-to-person relationships," said Principal Roger Vanderhye. "People working with people, children with children - those create lifelong friendships." "

In September 2008, Yabe Elementary in Japan and McLean’s own Spring Hill Elementary signed a memorandum of friendship. This allowed both Yabe’s students to travel to the district and Spring Hill students to jet off to Yokohama, Japan. Spring Hill rising sixth grade students traveled there last summer.

"It was very different," said Sarah Luthra, 12. "It was very clean there. In school, they would recycle their straw wrappers."

She and many other of the girls recalled how they felt like the school made them feel like celebrities.

Fourth grade teacher Christine Fowler said it was only a coincidence that the visit happened during the National Cherry Blossom Festival - another international tale of mended fences and friendship.

The students, children about 12 years old, traveled with three other adults. At the ceremony, two translators repeated everything said to the international students that day to help them feel included.

"Everything is big," said 11-year-old Risa Takagi, describing her first moments in the U.S. "We’re going to see a baseball game Saturday." Her favorite part of the friendship ceremony was the music by the chamber orchestra, which played Walk Dem Bones, Square Dance and 1812 Overture. In turn, the Japanese students sang "It’s a Small World" in their language and in English.

The trip also included the elementary school principal exchanging gifts with the supervisors accompanying the Japanese students. Principal Vanderhye said his gift was a clock with two faces - one face set to local time in Yokohama and one set to Eastern Standard Time.

The trip included a trip to the U.S. Capitol and Japanese Embassy on Monday. The students will stay until Wednesday.