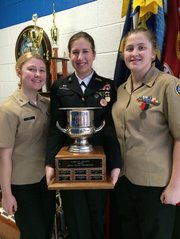 The Herndon team is coached by CDR Rick Cassara (US Navy, Retired). CDR Cassara spends hours teaching rifle safety, demonstrating proper technique, and honing this popular team to the four best shooters for competition in the Spicer Cup and other events. He and the team’s Cadet Commanding Officer, Allison Maxwell, set high expectations for their team members, who not only must maintain a high regard for safety, respectable conduct, and good sportsmanship, but also must consistently demonstrate their skill in this challenging Olympic sport.