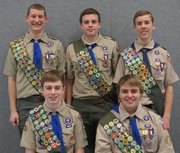 Five new Eagle Scouts were awarded their Eagle medals by Troop 706 of Our Lady of Mercy Catholic Church in Potomac, on Sunday, March 9.

David Bjorklund, Charlie Blackwood, Brendan Clark, Matthew Fisher and Liam Gibson received Boy Scout’s highest honor, the rank of Eagle, during the Eagle Court of Honor ceremony that included a candlelight procession through the various ranks of scouting on their “Trail to Eagle.” Each earned their new rank at various times over the course of the past year and waited until now so they could have their ceremony together.

All five boys joined Cub Scouts as youngsters in elementary school and Boy Scouts in fifth grade. To complete their Eagle Rank, each devoted numerous hours toward their Eagle Scout Project. David Bjorklund, a senior at St. John’s College High School, re-landscaped a Catholic preschool entranceway by removing graffiti, installing a French drain, laying paver pads for six benches and planting shrubs. Charlie Blackwood, a sophomore at Gonzaga College High School, removed overgrown shrubs and a broken flagpole at St. Francis International School and St. Camillus Catholic Parish in Silver Spring. He replaced them with a new flagpole and surrounding plantings in the colors of the Maryland state flag. Brendan Clark, a sophomore at Georgetown Prep, converted an unused side yard at St. Francis International School into a prayer garden filled with flowering annuals, bushes, a tree and two benches. He also installed a 40-foot-long slate pathway and 36-square-foot patio. Matthew Fisher, a senior at St. John’s College High School, completed an oral history project for the Ladies Ancient Order of Hibernians, an organization for Catholic Women of Irish heritage. To help the Order in its mission to preserve the history and traditions of the Irish, Matthew’s team videotaped interviews of local Irish Americans. Liam Gibson, a senior at Gonzaga College High School, planned and oversaw the refurbishment and repair of a shower facility at the Father Horace McKenna Center, a homeless men’s resource center in Washington, D.C.

Rear Admiral Christopher J. Paul, deputy commander of the Naval Surface Force, U.S. Pacific Fleet, an also an Eagle Scout himself, spoke to the boys and the audience about the meaning of the Eagle Scout award, and challenged them to live their lives with honor, character and integrity.