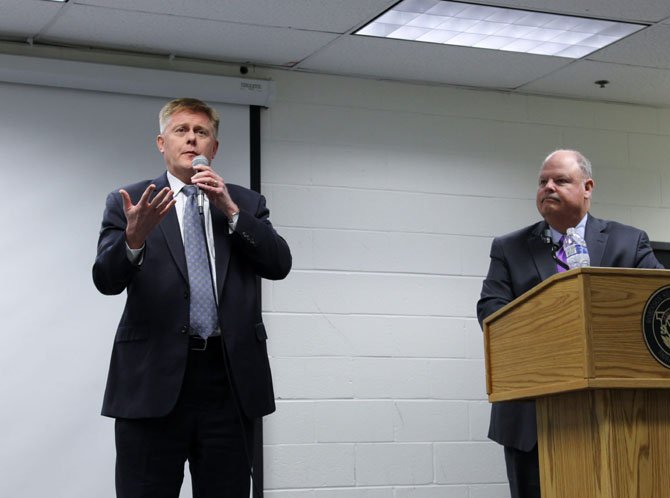 Fairfax County needs to be looking at the long-term picture in terms of the budget, Supervisor John Cook (R-Braddock District) said at a town hall meeting on April 1.

“Of course, we’re all looking at the budget that starts July 1, but I’m really interested in hearing some dialogue about the next three, four and five years,” Cook said.

The meeting, which was dedicated to discussions on the Fairfax County FY 2015 advertised budget, included a presentation by County Executive Ed Long.

Long said he is much more optimistic about this year’s budget, and echoed Cook’s opinion that the budget should be considered long-term.

According to Long, technology and public safety investments are two important long-term issues Fairfax County will be looking at over the next couple of years.

Still concerning, however, is that Fairfax County is still seeing the effects of the government shutdown that occurred in October 2013, Long says.

Another concern is the sales tax revenue, which has dropped in Fairfax County.

“Snow has had an impact on the local economy,” Long said. 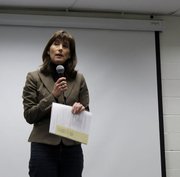 Megan McLaughlin, the Braddock representative for the Fairfax County School Board, talks about issues facing the school system at a town hall meeting at Robinson Secondary School on April 1

Although Long’s proposed budget does not include an increased tax rate, homeowners in Fairfax County will see property taxes increase by $331.67 or more, on average, due to increased assessments. Funding from real estate taxes makes up 63.2 percent of the budget.

“The bad news is it was only 62 percent last year. We’re becoming more dependent on real estate,” Long said.

At the request of the Board of Supervisors, Long presented a list of further possible reductions to the budget totaling around $20 million on March 18.

Cook, who asked for the list of cuts, said at his town hall meeting that he isn’t happy about that list, and plans on coming up with one of his own.

Questions and comments on school funding were common from the audience at the meeting.

“You’re asking for cuts and cuts and cuts. I know your discussions aren’t done yet, but what are we seeing on the county level to do the same thing Dr. Garza did with her 730 cuts?” Kathy Ryan of Annandale asked at the meeting.

Cook said that a multi-year discussion between the Supervisors and the school board on the school system’s budget is needed.

The Board of Supervisors has advertised a two-cent increase in the real estate tax rate, but this rate could be lowered when the budget is approved at the end of April.

“If we can’t find the cuts on the county side, because I don’t want to necessarily cut county services, then maybe we have to be looking at what that two penny increase does to our tax bills but maintains quality of life in Fairfax,” said Braddock District School Board member Megan McLaughlin said.

Braddock resident James Hawkins said at the meeting that the county and schools need to be more efficient as to where money is spent.

Public hearings on the budget are April 8, 9 and 10 at the Fairfax County Government Center. The formal adoption of the budget is April 29.