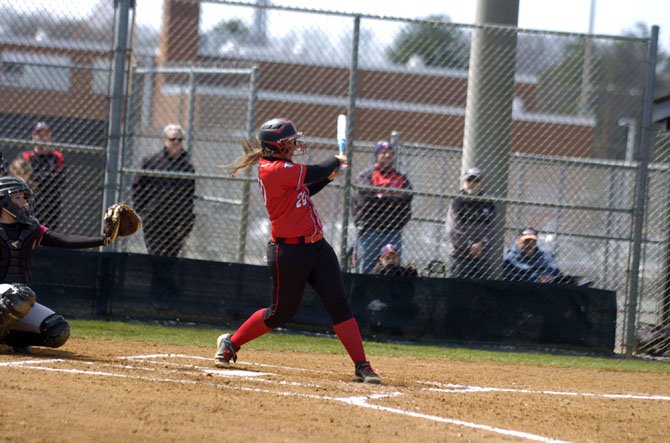 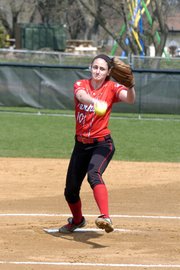 Madison sophomore pitcher Katie Vannicola has been a key contributor to the Warhawks’ 6-0 start.

Madison scored nine first-inning runs against Oakton senior pitcher Allison Davis, a University of Virginia signee, and cruised to a 12-7 victory on April 5 at Madison High School. The Warhawks sent 14 batters to the plate in the opening frame, belted eight hits and benefited from three Cougar errors. The early offensive explosion helped Madison score double-digit runs for the fourth time during the team’s 6-0 start.

“I think for any team, going out and scoring [nine] runs in the first inning, you go out intense and it carries through for the rest of the game,” said Madison sophomore catcher Julia Hoy, who had two hits in the inning. “Especially against Allison Davis --- she’s a great pitcher --- and it just feels great to know that my team can do that against a great pitcher.”

After surrendering a slew of unearned runs in the first, Davis moved to center field in the second inning, replaced in the pitcher’s circle by senior Alana Peters.

“I was proud of them today,” first-year Madison head coach Jim Adkins said. “They came out swinging the sticks, offensively. Allison Davis is a really good pitcher, one of the best in the area, for us to jump on her … sends a message that we’re trying to send.”

“I think for any team, going out and scoring [nine] runs in the first inning, you go out intense and it carries through for the rest of the game. Especially against Allison Davis --- she’s a great pitcher --- and it just feels great to know that my team can do that against a great pitcher.”

Fallas earned the victory in relief, allowing two earned runs and two hits in four innings while walking one and striking out four.

Sophomore Katie Vannicola has been Madison’s primary pitcher during its undefeated start. She pitched the first three innings of Saturday’s game before giving way to Fallas.

“Katie has really been our workhorse so far,” Adkins said. “This was the fifth game she’s pitched this week, so it was taking its toll on her. She did not have her good stuff. The ball wasn’t moving, her arm was starting to get sore, as a result of that she battled the best she could.”

Madison finished region runner-up last season and advanced to the state playoffs. This season, the Warhawks won their first six games with a blend of youth and experience.

Meanwhile, Oakton dropped to 0-3, including an 8-7 loss to Tuscarora on April 1 and a 2-0 defeat against South County on April 2.

Oakton senior Allison Davis went 3-for-3 at the plate against Madison on April 5, including a two-run homer.

Davis, one of the top pitchers in the region as a sophomore, when she led the Cougars to the 2012 state playoffs, has battled an injury to her right (pitching) wrist since last season. Oakton managed to win the Concorde District title in 2013, but the future Virginia Cavalier said she’s not yet 100 percent.

“It was a rough game, but it’s nothing that can’t be fixed and worked on during practice, so we’re just going to keep moving forward,” Davis said. “… I’m still dealing with [the injury], but I’m hoping that by summer time, by the time I get to college, it will be ready to go.”

While Davis didn’t have her best stuff in the pitcher’s circle, she made an impact at the plate. The senior went 3-for-3 with a triple, a home run and three RBIs. She hit a two-run bomb in the third inning. Three batters later, senior catcher Marleigh Hall belted a three-run homer, cutting the Madison lead to 9-5.

Peters pitched well in relief for the Cougars, allowing three runs --- one earned --- and five hits in six innings. She walked four and struck out four.

“We have one of the best pitchers in the region, I still believe, even though she got roughed up today. I really believe we should be in contention for the league title.”

“We have one of the best pitchers in the region, I still believe, even though she got roughed up today,” first-year Oakton head coach Kelly Butterfield said. “I really believe we should be in contention for the league title.”

Butterfield is Oakton’s third head coach in as many seasons. However, Davis said the Cougars haven’t been bothered by the coaching turnover and she has confidence in Butterfield, and assistants Morgan Lamon and Kristen Lord.

“Honestly, it’s a new year every year, so we come out there and there’s new players, there might be new coaches and we just look at it and say it’s a new season,” Davis said. “I think our coaching staff is excellent this year. It’s really going to take us far.”