Raising funds to save animals from high-kill shelters. 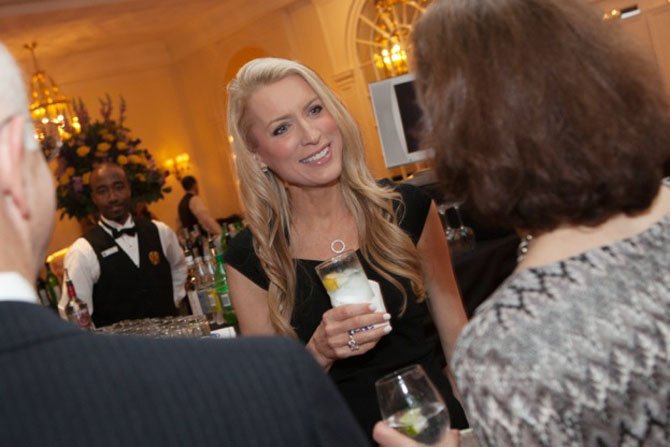 The featured speaker for the evening, Chief Operating Officer of the Humane Society of the United States Laura Maloney spent time discussing the seriousness of animal rescue and the horror of puppy mills. Photo by Michael Bonfigli

This pup shows all the hope in her eyes during the gala. Many of the pets had potential adopters interested.

Potomac — It was a “place your bets on the pets” night — and the pets won.

Not to be left behind on an evening devoted to their welfare, rescued pets arrived cuddled in the arms of volunteers and captured the crowd. Dogs and cats exhibited their best behavior during cocktails and the pups saved their big sloppy kisses for that special someone who may think about adoption and change their lives.

It was not easy for guests to tear themselves away from the pets, but many also managed to bid on auction items ranging from Hudson Trail Outfitters’ dog trekking gear to a Yuki pearl necklace by Potomac artist Deepika Prasad.

Auctioneer and master of ceremonies Wayne Bryan flew in from Los Angeles for the event. Bryan, who is the famed father of the even more famous tennis twins, Mike and Bob, (they racked up so many doubles titles their dad lost count), put a California spin on this east coast fundraiser. He strolled among the tables, just shy of sitting in the guest’s laps and teased and chided the bidders into action. The live auction, called “Life is Suite,” featured four private sports suites that could only be visited if you paid the price.

Part comedian, part showman, he fused what could have been just another fundraiser into a happening, never forgetting that the pets were the ones whose lives would be changed forever as a result.

Paying a surprise visit and generating much buzz, jazz saxophonist Ski Johnson, also a Potomac resident, joined the crowd and offered a night of serenading to a lucky auction bidder. It became Potomac’s night as another resident, Ginny Faucette, called out the winning bid.

At the end of the evening, according to founder, Lizette Chanock, the caring and generosity of the guests will provide the funds needed to rescue and care for more pets than last year’s lucky number of 763.

Postscript: Among the guests, a few particular hearts opened to adopting one or more of the night’s furry friends, making the evening complete.

Carole Dell is a board member of PetConnect Rescue. To volunteer, adopt or donate, visit: www.petconnectrescue.org