New exhibit displays artifacts and reproductions of a bygone era. 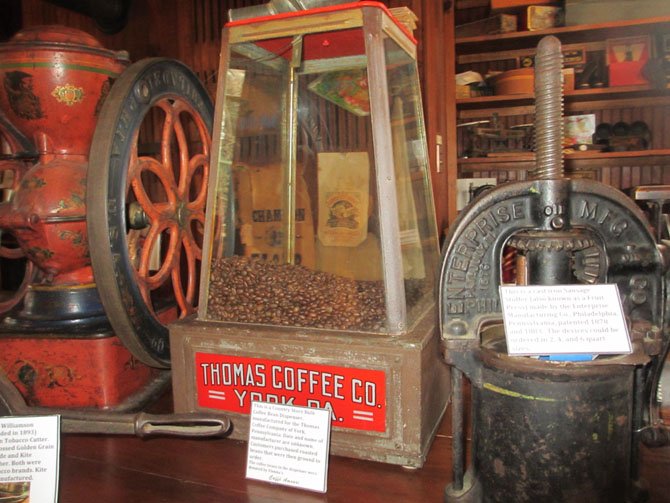 Coffee beans were scooped from this cast iron and glass storage container into a manual coffee grinder. 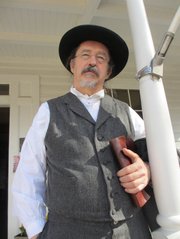 ”Abram Lydecker” greeted guests at the reception honoring Freeman Store and Museum’s newest exhibit, History of the Country Store. Lydecker shared recollections from the days leading up to the Civil War to the end of it. 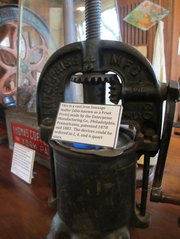 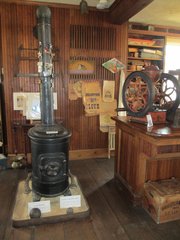 Since it was purchased by the Town of Vienna and operated by Historic Vienna, Inc., the Freeman Store and Museum has retained the feel and ambiance of an old-fashioned general store.

Although Freeman Store and Museum’s new exhibit, History of the Country Store, opened in early March, Historic Vienna Inc. chose a sunny and warm spring day for its opening reception on April 6. A steady stream of guests filtered through the store and museum examining the artifacts and reproductions on display in the store and upstairs in the museum and parlor. The Freeman Store is listed on the Virginia Landmarks Register and the National Register of Historic Places.

Abram Lydecker himself, who lives as an HVI historian and reenactor in his alternate ego, greeted guests and shared recollections of the birth of his store just before the Civil War broke out, during the war, and post-war business.

Abram and Susan Lydecker moved from New Jersey with their nine children in 1859, founding the community’s first general store. The store was used as a secession vote polling place on May 23, 1861. Vienna was one of the few precincts in Virginia to vote against secession.

“We just moved here from New Jersey and the village is very small,” said “Lydecker, referring to 1859. ”We don’t have many people living here yet but a lot of new agricultural technology was introduced here in Fairfax County.

“It’s nice for me and my family to have store next to the railroad so we can get goods and ship to people.”

Ken Liu and his 11-year-old son Jason visited the Freeman Store and Museum during the reception. Jason is earning his Boy Scout Citizenship in the Nation badge and the Vienna family recognized Freeman Store’s historic designation. “We’re losing a lot of the original concepts,” said Jason. “Modern technology can help us do things faster but we shouldn’t forget the original ideas.”

Ken Liu said he was particularly struck by “Lydecker’s” conversations, especially when learning that the federal government suspended the Constitution when they took over the store during the war.

The exhibit, History of the Country Store, runs through the year. Counted among the displays are artifacts from the mid-19th century to the turn of the 20th century and reproductions that replicate goods, from feed and food to dry goods. The checkbook and satchel used by Leon Freeman, whose father Andersen Freeman married Abram Lydecker’s daughter, is displayed. Leon Freeman was the first president of the Vienna Bucket Brigade, the precursor to the Vienna Volunteer Fire Department.

“It’s fun to share the Freeman House as an open house,” said HVI Board member, Dave Shelby, who commented that HVI was pleased with the turnout. “It’s nice to show people what the building originally served as and how the world here used to be.”

Freeman Store and Museum is open Wednesday through Sunday, noon to 4p.m. There is no admission charge for exhibition. For information on the exhibit or to enquire about Historic Vienna, Inc., go to historicviennainc.org.