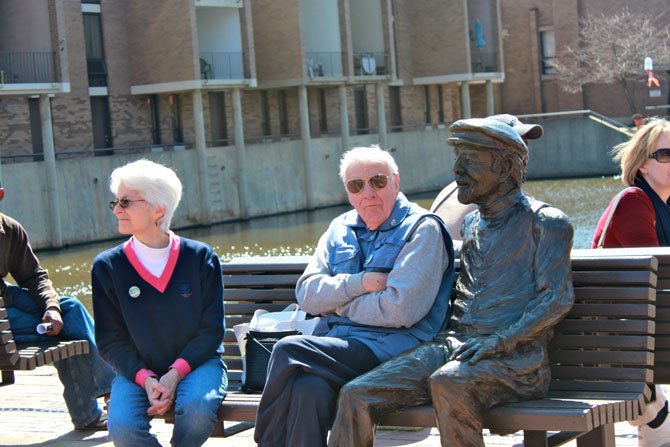 “Bob Simon, here we had an idea guy that followed through, and out of that idea flourished a place that had extraordinary values.”

Local officials laugh at a joke made during a speech. 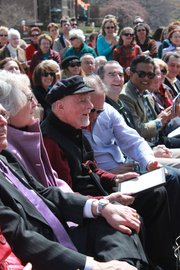 Robert Simon smiles while holding the U.S. President’s proclamation honoring him for his 100th birthday.

Reston founder Robert Simon Jr.’s birthday bash was the biggest party in town.With cake, music performances, proclamations and even a quick visit from the governor, Saturday’s Founder’s Day festivities at Washington Plaza attracted hundreds of spectators and a big smile from Simon himself.The event, an early 100th birthday celebration for Simon and Reston’s 50th anniversary, was held from noon until nearly 3 p.m.“Bob Simon, here we had an idea guy that followed through, and out of that idea flourished a place that had extraordinary values,” said U.S. Rep. Gerry Connolly (D-11). “Now, Tim, we can use some of those values in Congress.”Connolly was among other officials, including Gov. Terry McAuliffe, U.S. Senator Tim Kaine, state Senator Janet Howell and Supervisor Cathy Hudgins to praise Simon and issue proclamations for his upcoming milestone birthday.“For me and for my family, this is very special in that we landed here by accident in 1969,” said Supervisor Hudgins. “In 1969, things were vastly different in the country and the world, and we found that we were lucky to be able to find a place we could raise a family, we could create friends, we could give back, and do what everyone thought was the most important part of being a community.”

MANY SPEAKERS talked about Simon’s vision for a racially and economically diverse community. “In 1964 when Reston was open, discrimination in housing was still rampant in the United States, and it was legal. It was legal,” said U.S. Senator Kaine. “It wasn’t until 1968, four years after Reston opened, that the United States House and Senate passed the federal Fair Housing Act. It wasn’t until 1971, seven years after Reston opened, that the Virginia General Assembly passed the south’s first Fair Housing Act, so this was a very different community, a very different commonwealth. But one of the ways that Bob was such a visionary was to recognize all humans ought to be able to live together and be neighbors. What a simple thing. What a beautiful thing. What a powerful thing.”Gov. McAuliffe stopped by the event to issue a proclamation thanking Simon for his vision, Reston’s contribution to Virginia’s economy and being the first truly integrated community. With the proclamation, he recognized Simon’s quickly approaching 100th birthday on Thursday.Because of the hundreds of people who showed up to the event, McAuliffe added a final note on his thoughts for state health care.“We have got to stop the partisan ideological battle and do the right thing,” he said. “These folks have waited long enough for health care. It is our right, it is our duty and I can promise you this: I made a commitment to you, and we are going to get the health care to those 400,000 Virginians.”Stepdaughter Lynn Lilienthal - with Levi Lilienthal and Maya Deutchman - announced a special proclamation from President Barack Obama.

RESTON’S “NEW TOWN” historic marker was unveiled and Lake Anne Redevelopment Council announced their plans to break ground in several months. The majority of the construction will take place next year.“Lake Anne and Reston are celebrating 50 years as Bob Simon prepares to celebrate his 100th birthday,” President of Republic Land Development David Peter said in a press release. “His robust longevity has afforded us the rare opportunity to collaborate with him and learn more about his nationally renowned vision firsthand.”Other parts of the afternoon’s programs included a poetry reading from the winner of a contest, songs by several local schools and a hearty rendition of “Happy Birthday” before cake was cut and passed through the audience.Resident JoAnn Shaub, who has lived in Reston with her husband since 1975, was one of many that signed a giant card for the man that founded her community.“When we first moved here to Lake Anne, I thought, ‘What a wonderful place to raise a family,’” she said. “It’s great to celebrate Mr. Simon’s vision and creativity for his 100th birthday.”