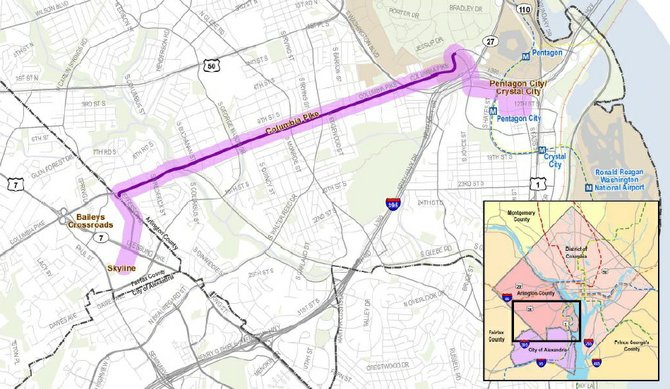 The ongoing saga of the Columbia Pike streetcar gained yet another study last month, but critics say the latest investigation failed to address their concerns.

At issue is a new return-on-investment study, which concludes that a streetcar system would generate about $2.2 billion to $3 billion more than enhanced bus service. But critics say consultant HR&A Advisors missed the mark by not conducting a return-on-investment study for a bus-rapid transit system, which they say would be better for Columbia Pike than a streetcar system.

"That's idiotic," said John Snyder, one of the leaders of a group known as Streetcar Now. "Bus rapid-transit will not run as bus-rapid transit is defined by people in the transit industry, which means a dedicated lane for most of the route is not going to run on Columbia Pike."

The debate over the streetcar system has often turned into a semantic question about the definition of bus-rapid transit, a term that dates back to the 1970s. Essentially a bus-rapid transit system combines the speed of a transit line with the flexibility of a bus system. Supporters of the streetcar say Columbia Pike could never have a BRT system because it is not wide enough to have dedicated lanes. Critics of the streetcar say dedicated lanes are not necessary for a BRT system along the pike.

"There's nothing idiotic about a fair unbiased, side-by-side comparison of these alternative transit modes," said Peter Rousselot, leader of a group known as Arlingtonians for Sensible Transit. "The biggest weakness of the streetcar system on Columbia Pike is that it will have to operate without a dedicated lane, and that is a much bigger problem for streetcars than it is for BRT."

THE LATEST STUDY began in September 2013, when HR&A was hired to update the analysis of the streetcar's projected return on investment and compare it to enhanced bus service. The firm analyzed the ability of both streetcar and enhanced bus to facilitate the development goals, although it did not conduct a return-on-investment study for bus-rapid transit along Columbia Pike. The analysis included the experience of other cities that have installed streetcars and enhanced bus service by looking at assessed local real estate conditions in addition to conducting interviews with developers and retailers.

“This study further demonstrates that streetcar is the right investment for Arlington," said Arlington County Board Chairman Jay Fisette. “We selected the streetcar because it will provide transit capacity for the county’s long-term growth and sustainability, maintaining our economic competitiveness and helping to create the next chapter in our transit-oriented success story."

Critics said they didn't believe the analysis was independent. An analysis of the report conducted by Arlingtonians for Sensible Transit concluded that the consultant conducted a "shameless whitewash of the County Board's desired outcome." Opponents of the streetcar said they were particularly concerned that the report was released a few days before a special election for Arlington County Board, which included a fierce debate between candidates on the streetcar.

"This study was done after the county has already decided that it wanted streetcars in the first place," said Rousselot. "So this is a failed attempt to plug some holes in a study they did in 2012."

THE STUDY concludes that about 10 years after the beginning of construction, the streetcar would attract 6,600 new jobs to the corridor. The consultant's analysis was that this would be more than three times the incremental employment supported by enhanced bus. That anticipated job growth is expected to increase real estate development, leading to the anticipated growth in land values. Supporters of the streetcar believe the study should end the debate once and for all.

"These people are professionals," said Snyder "They're economists, and they are real-estate and development professionals."