The End of an Era
Votes

The End of an Era 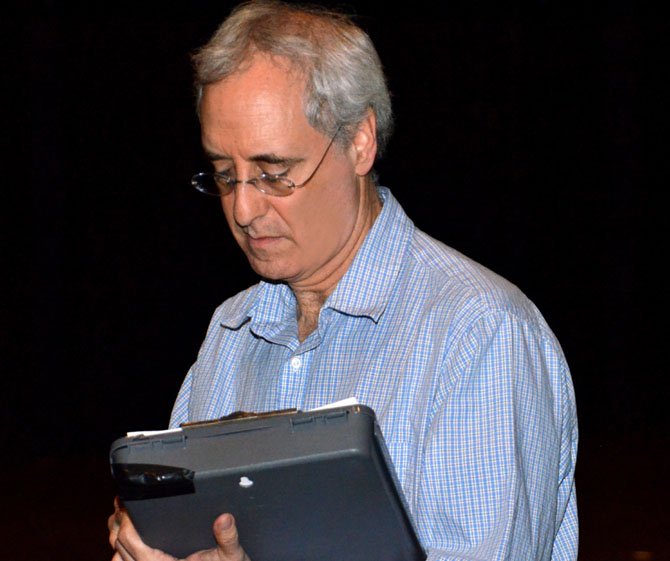 It’s the end of an era at Robinson Secondary: Legendary Theater Director Chip Rome has retired. In 1981, he became the fourth drama teacher the school hired that year, and he more than provided stability. He spent all 33 years of his FCPS career there.

“I have a book to promote, a vacation home to enjoy and the prospect of a new business. So we’ll see what comes my way.”

Chip Rome directed at least 100 plays during his three decades at Robinson Secondary School. Below, he discusses some of his favorites:

“Morph” brought Robinson’s first Cappies win for Best Play in 2005. “It was a special show and a brilliant script,” said Rome. “We built a pool with three depths of water on the stage. My son Robert was in that show and was nominated for Comic Actor.”

For his 20th year at the school, Rome reprised “Bye Bye Birdie” – which was the first musical he’d directed at Robinson. And, he said, “The kid who played Birdie, plus the voice of Ed Sullivan in our original show, came back and did that voice again.”

“When we did it for the second time, it was the first time we won the Cappie for Best Musical,” said Rome. “It was my grandfather’s personal story, so I totally understand that show.”

One of his most treasured memories, however, wasn’t a particular play, but what happened for it. “For my 25th show, the drama boosters held a surprise party in my honor,” said Rome. “My students from 1983 through 2009 returned – and that’s something I’d wish for every teacher. Some of them flew in from all parts of the country – it was extraordinary.”

“When I got the job, I was still trying to decide whether to go back home to Worcester, Mass., and join my father and brother in Rome Specialties, selling advertising on items and manufacturing denim shirts,” said Rome. “But a parent wrote a letter to the principal praising my growth as a teacher, and that tipped the balance.”

And his wife, Sunny, whose parents were professional actors, encouraged his creative endeavors. Actually, Rome began his teaching career in England in 1976 in a school Southwest of London. “I could see shows in Stratford or London,” he said. “It was quite the adventure for a young teacher.”

He’d acted and directed in college and at summer camp, but realized he needed more training in technical theater. So he obtained a master of fine arts in drama, with a concentration in directing, from Catholic University, and that’s what brought him to the Washington, D.C., area. Simultaneously, he got a masters in education from Assumption College in Worcester, Mass.

IN 1981, Rome was working stage crew at Arena Stage and directing an after-school drama program and substitute teaching in Maryland, when someone told him Robinson needed a theater director to finish out the school year. “I’d never heard of Fairfax, Va., but it was three weeks work, so I took it,” he said. “They kept me on for the next three decades.”

He stayed because of his students and their shows. “I’ve been fortunate to see the kids grow and do their best where ‘good enough’ is never good enough,” said Rome. “The arts are about reaching farther than you ever thought you could. Every show brings new challenges and new enthusiasm from the kids. You get to see the finished project and move on to the next one.”

Calling it “enormously time-consuming,” he said he’s lucky his wife understands how theater works. Both his children were in Robinson’s theater program, too. Son Robert was a Cappies nominee, worked on the first original Cappies musical with Bill Strauss and now performs in an improv troupe. And daughter Anna is a black belt in Tae Kwon Do and teaches adaptive martial arts to youth on the autism spectrum.

Recalling career highlights, Rome said one was when he directed his first of eight Cappies galas, and there, too, was Shari Silberglitt Moxley. She was in his first theater class and is now a professional stage manager working regularly at The Kennedy Center.

Halfway through his years at Robinson, the school went from six to seven periods a day and implemented block scheduling. It also underwent a $30 million renovation, which was a boon to the Theater Department. A former parking lot became a prop shop, a costume shop, two extra dressing rooms and a black-box theater/classroom. “It gave me extra toys, space and possibilities to expand the program even further,” said Rome.

Four times, he’s taken theater students to the famed Fringe Festival – the largest arts festival in the world – in Edinburgh, Scotland. And the last two times, Robinson students also performed off Broadway in New York before performing there.

The toughest part of his job, said Rome, was “finding that balance between family and other parts of my life. It’s a very absorbing career. I love theater because it’s the world in a microcosm. It involves things such as psychology, carpentry, history and lighting. All these pieces come together when you create a world onstage, and it’s always different – that’s what keeps it interesting.”

Photo courtesy of Frank A. Ruth

“And there’s always a place for everyone in theater,” he continued. “There’s no such thing as ‘just a curtain-puller’ because, without them, there’s no show. And I’ve let the backstage crews earn the respect that’s typically afforded the performers.”

MOST REWARDING, said Rome, is “when you see the light go on in kids’ eyes because they get it. And when kids later come back and tell me, or write me, that I made a difference – that’s enormously gratifying. My job is to create theater lovers and audience members, whether or not they do this professionally. To me, theater is a safe space to investigate conflict and its consequences.”

By participating in theater, he explained, “Kids build communication skills and the ability to think outside the box and to finish on deadline a project beginning with incomplete information. My job is to give them a chance to express and develop their creativity, and I’m most satisfied when we’ve successfully created community – both within our theater family and the larger community.”

But that’s not all he’s been busy doing. Rome and two other theater teachers, Mary Lechter and Zoe Dillard, have written a book detailing how a first-year theater teacher can determine priorities and develop a theater program. Lechter’s going to teach from it at GMU and, hopefully, they’ll get it published.

And recently, Rome and his wife bought a vacation home in Cape May, N.J., where he may open a comedy club with another theater director, Lori Knickerbocker. He calls the home “a chance to spend long weekends, instead of having no weekends. Lori’s retiring 10 minutes away, and I’m excited about the prospect of a comedy club.”

So why retire now? “A friend of mine passed away [this spring] from a brain tumor,” he replied. “It reminded me to spend that precious time with my family while I can. And I always told my students, when posters of my shows go around the walls of the black box and meet each other, I’d be done – and they do.”

So, said Rome, “I have a book to promote, a vacation home to enjoy and the prospect of a new business. So we’ll see what comes my way.”