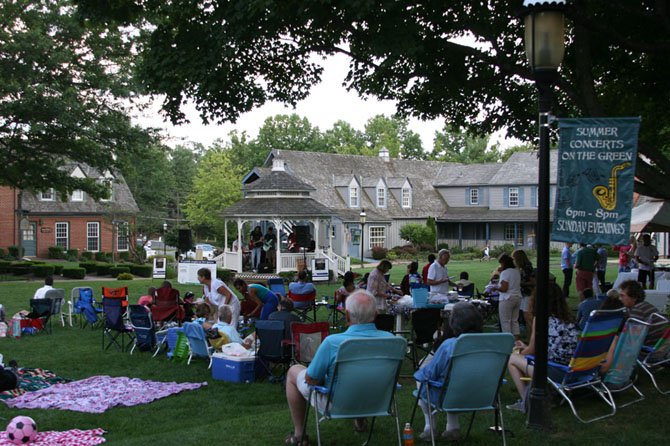 Dozens of Great Falls residents gathered in the Village Centre to listen and enjoy music at the close of the weekend. Photo by Nikki Cheshire/The Connection

For many people, Sunday evenings are a last night of quiet relaxation before another hectic workweek. Great Falls residents, on the other hand, enjoy a much different type of tempo to finish out the weekend. And on this particular Sunday, it was to the tune of Southern rock. 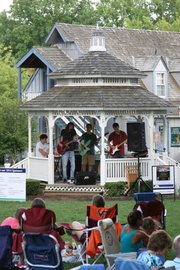 Atlas Road Crew, a southern rock band from South Carolina, performed for a growing crowd at last Sunday's Concert on the Green.

The band Atlas Road Crew graced the crowd in the Village Centre for the weekly Concert on the Green event. The group – consisting of Taylor Nicholson (vocals and guitar), Max Becker (bass), Dave Beddingfield (guitar), Bryce James (keyboard) and Patrick Drohan (drums) – met at the University of South Carolina and have played together for over two years. They were on their way to a gig in D.C. and Ohio when they stopped in Great Falls.

Drohan is a former Great Falls resident and Langley alumnus, and suggested the band stop and play a show in the area. The sponsors for this week, realtors Glynis and Kevin Canto, are old next-door neighbors of Drohan.

“It’s just a great way to end a summer weekend: with friends and great music, then over to the Old Brogue for fun and a beer.”

The band draws on influences from each other’s backgrounds, and brings together a “west coast vibe” with the southern style of South Carolina, as described by Nicholson. Bassist Max Becker added: “We were fed up with the new music scene. We wanted to bring back some good ol’ rock ‘n’ roll.”

They drew a large crowd, in which were many regulars. Great Falls resident Rich Curd said he loves the southern rock Atlas Road Crew brought to the Green. “These concerts are terrific, one of the best series in years and years,” said Curd. “It’s just a great way to end a summer weekend: with friends and great music, then over to the Old Brogue for fun and a beer.”

Attendee Leili Bowers said she’s been attending the concerts every Sunday possible since she moved into Great Falls 10 years ago. “It’s fun and relaxing. The music has been really good this year,” Bowers said. “You’ve gotta do it once, and then you keep coming.”

There are three concerts left in this season’s series. On August 10, guitarist Tom Principato is performing. “Principato is fantastic,” Curd said. “Not to be missed.”