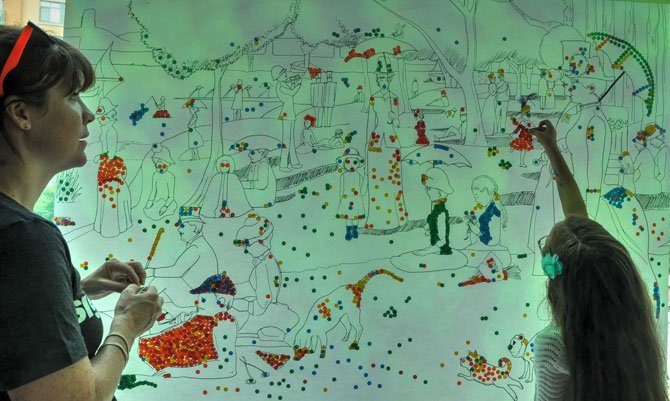 Signature Theatre’s graphic designer Jessica Aimone watches over as more dots are added to a re-creation of George Seurat’s painting “A Sunday Afternoon on the Island of La Grande Jatte.” Photo by Louise Krafft.

Signature Theatre held its annual open house on Saturday, Aug. 2, on the plaza and in the theatre in Shirlington. Volunteers guided children in making hats, coloring postcards, jumping on the moonbounce and more. The Plaza Stage featured performances by the Junkyard Saints, Levi Stephens, The Bitter Dose Combo and the Grand Finale – Broadway on the Plaza. Inside, the theatre performances continued throughout the festival in the Max and the Ark Theatres. There was cabaret performances in the Mead Lobby as well as acting and workshops and sing-a-longs in The Shen. For information on upcoming performances visit www.signaturetheatre.org