Council permits archery hunting within 100 yards of homes, down from 150 yards, in an effort to reduce the number of deer. 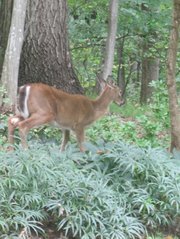 Collisions with cars, Lyme disease, crop and environmental damage from deer are all increasing.

“A deer smashed through my window," the councilmember said in front of the Montgomery delegation to the Maryland General Assembly. “All of the bones on the left side of my face were shattered, my cheek, my nose and my jaw. I’ve had four facial reconstruction surgeries. People tell me I’m lucky.”

On Tuesday, July 29, 2014, Montgomery County Council passed a bill to reduce the archery hunting safety zone in the county from 150 to 100 yards from "a dwelling house, residence, church or other building occupied by human beings."

Beyond Archery: Sharpshooting and Managed Hunts in County Parks

What is a managed hunt?

A managed hunt is a controlled deer hunt for the purpose of reducing and or maintaining deer numbers on parklands for the benefit of natural ecosystems, local farmers, citizen landscapes, reducing deer vehicle collisions and an overall reduction of deer human conflict.

Have there ever been any major injuries as a result of the managed hunting program?

No, since its inception, the managed hunting program has been strictly monitored, and safety has remained paramount throughout. To date there have been no serious injuries to hunters or citizens. … Safety is the number one priority, and there is a zero tolerance level for any behavior that could result in serious, negligent injury

What is the Park Police sharpshooting operation?

The Park Police sharpshooting operation uses sniper trained, M-NCPPC Park Police officers to effectively and efficiently remove deer from areas that are not conducive to hunting.

What is a sharpshooter?

A sharpshooter, in terms of deer management, is a highly trained individual capable of lethally removing a predetermined number of deer, in a humane manner, using specialized equipment (noise suppressed rifles) over a short period of time and under conditions not suitable to hunting (i.e. under the cover of darkness and in areas too small for safe hunting practices).

The council's action follows a similar step with Maryland state law; the General Assembly passed a similar bill this past legislative session.

"There has been growing public support for addressing this issue in a sustained and comprehensive way," said councilmember Phil Andrews.

"We need to look at all methods available to us to address this issue before it gets completely out of hand," said Council President Craig Rice who co-sponsored the bill with Potomac’s councilmember Roger Berliner.

Potomac resident Peggy Dennis testified before the council and the council's Public Safety Committee this past month.

"What we are looking for is the opportunity of turning a sport into a public service by allowing skilled and safety conscious bow and arrow hunters to hunt in more people's backyards," she said.

There was no testimony in opposition to the bill last week.

The numbers don't include collisions where police are not notified.

"It is a mind boggling number, so the urgency is extreme," said Leventhal. "This is one step among many that I think the county should be involved in."

Dr. John Hench, an expert on deer management with Park and Planning, spoke for 10 minutes before the council unanimously approved the bill.

"There are no predators in Maryland anymore except perhaps a few coyotes and, of course, the automobile. It is a tough nut to crack," he said.

"We believe it will allow for the greater use of a tool proven to be highly effective in removing white tailed deer from the landscape," Hench said, calling the practice safe when "practiced reasonably."

"It does appear to us that archery has now gained more of an acceptance within the general public," he said.

MANAGED HUNTS and police sharpshooting operations are being conducted throughout Montgomery County parks, carried out by hunters with guns. Cabin John Park in Potomac was added to the parks using such deer-management tools this past year.

Bow hunting in Maryland has a nearly perfect safety record, said Leventhal and others.

"There has never been a case in Maryland where a bow hunter injured someone who was not participating in the hunt," said Montgomery County Police Capt. Michael Wahl. "Most injuries or deaths associated with bow and arrow hunting result, in general, from bow hunters falling from tree stands."

Hench said last Tuesday that Park and Planning is investigating the possibility of instituting a pilot program on parkland for archery hunters, although currently sharpshooters with guns work to reduce the deer population on county parkland.

"It is simply not fast enough," he said, of bow hunting. "Sharpshooting continues to be the best option."

The sharpshooting operations “are incredibly highly managed with securing a perimeter and operating at night. We get in and out quickly," he said. "Safety remains the number one priority."

WHAT IS THE RIGHT NUMBER of deer to have in Montgomery County, Councilmember Berliner asked Hench during recent council hearings.

Infrared technology mounted on aircraft might provide an answer to how many deer are currently in the county, Hench said. The Deer Management Work Group plans to report back on a healthy number of deer to aim for before this year's budget process in the fall.

Councilmember Marc Elrich asked what practices are used in other jurisdictions or regions, such as parts of Virginia which use sterilization procedures especially in more urbanized parts of its counties.

"I am aware of the practice you speak of," said Hench.

"It is a very expensive process, and it's a very labor intensive process and dangerous for the biologists involved. It's not a pleasant process. They are powerful animals and it’s very traumatic on the animal.

"From my own personal point of view, it's probably more humane to take the animal's life than to put it through that trauma," he said.

"My professional advice? Hold off. Let us see what we can do with the tools we have in our toolbox and go from there."