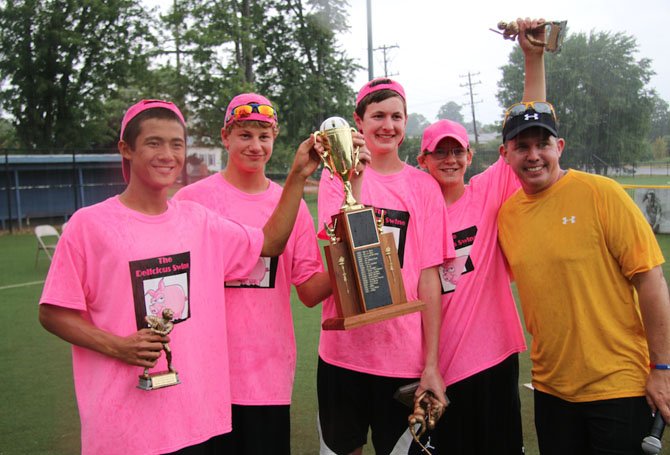 Waters Field was the place to be on Saturday, Aug. 2, for The 19th Annual Northern Virginia Wiffle Ball World Series [NVWWS]. The charity event was sponsored by the 2 Young Foundation [2YF], an organization dedicated to raising money for the fight against brain cancer, and Van Metre Homes. The day was filled with games, prizes and fun for everyone.

The day began at 8 a.m. as all 40 of the Wiffle ball team members checked in at the gate and made their way onto “The Field of Dreams,” where they were given their official team gear and rallied with the other players. The opening ceremonies started with an introduction speech by 2YF’s President, Michael Ryan, and the Vice President of Van Metre Homes, Brian Davidson, followed by the National Anthem performed by Abby Miller, a Loudoun local who is one of the nation’s leading advocates for childhood cancer awareness. The Special VIP guest of the day was Lara Sankner, a local 9 year old with Astrocytoma Grade 2 brain cancer who schedules her chemo early in the morning, so she can play softball in the evening. Tara was awarded the MVP trophy for her inspiring story, which kicked-off the 19th Annual Northern Virginia Wiffle World Series.

The NVWWS had multiple mini-stadiums laid out at Waters Field for the games to take place throughout the day, and Delicious Swine beat the Cocky Lambos to receive the coveted “Bedell Cup”. Long-time contributors of the NVWWS, Jason Farley and Joanie Dempsey, were inducted into the NVWWS Hall of Fame this year for their dedication to the foundation and the tournament.

2YF has sponsored the Wiffle World Series for the past nine years, contributing $300,000 in support of its cause. The 2 Young Foundation and Van Metre Homes are thankful that so many were in attendance for this year’s tournament, and the large number of teams and sponsors that contributed to the success of the fundraiser. The tournament raised over $40,000; with a portion going to National Children’s Medical Center this year, on behalf of Van Metre Homes’ new affiliation with this event. A grant will also be awarded to a local family in need of medical support who has been affected by brain cancer.

For information about the Northern Virginia Wiffle Ball World Series, or to make a tax-deductible donation, visit www.2YF.org.