Capturing and preserving the ever-evolving story of our the village. 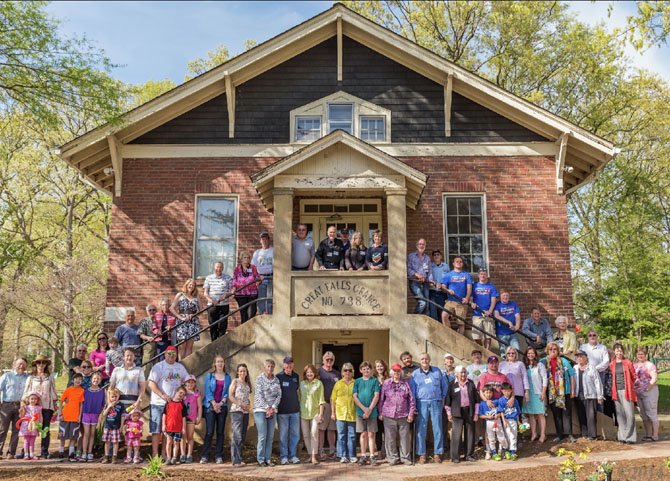 There are certain old-timers in Great Falls whose families are filled with memories that span generations and even centuries in this area, connecting them deeply with the local story. There are newcomers – some come for a five-year stint for work, with plans to remain in touch and return to their hometown; some immigrate from far away places, adopting our village as their new home; some come to sleep in Great Falls, only to work and play in other locations throughout the D.C. area. Some look at the land, enjoy the wide-open spaces, the pastoral setting, the peace and quiet, the critters running to and from and say that this place is sublimely beautiful. Others see the land and say that it can hold an immense house – it must be filled in with something hugely man-made to be assuredly prestigious.

CERTAIN LANDMARKS, great and small, serve as symbols of the unfolding story of local aspirations over the centuries…

Re-enactors pole through the Patowmack Canal at Seneca Falls, June 1987.

A young, 16-year-old George Washington was asked to survey the land from the Shenandoah to Georgetown for Lord Fairfax, a large local landowner. That careful survey awakened a vision of the potential of the Potomac River, and the possibility it held to move produce and cargo from the Ohio River and the Shenandoah to Georgetown, where it could be shipped to Europe. Washington purchased the land where the Colvin Run Mill now stands, realizing the potential of the Difficult Run stream to power a flour mill. His early vision later inspired the formation and early management of the Patowmack Company, where he gathered investors to build a series of locks along the Potomac River to facilitate boat travel up and down the river. The meetings and negotiations he held among representatives of neighboring states, initially between Maryland and Virginia, and then others, effectively formed the basis of the first continental congress and opened the way for states to discuss and prepare a shared constitution. While the Patowmack Company ultimately was short of capital and went bankrupt, although recognized retroactively as accomplishing one of the great engineering feats of the 18th century, it accomplished a more enduring purpose – to unite disparate states into a nation with a common vision that has endured through today.

The Brown Farm’s Milk House stands at the west entrance to the Colvin Run Road. The plaque on the door notes that the milk house has been standing since 1851. The Brown family came to the Colvin Run area at that time, a minister, Jesse Brown and his father, Augustus, and their families, to set up a missionary church and to farm. They built Brown’s Chapel, which has since been moved to the Reston area and can be found on Baron Cameron Road; there is a graveyard, Brown’s Memorial Cemetery, with the various distinguished members of the Brown and Van Patten family just west of the milk house on Leesburg Pike, and there was a substantial farm at the site just behind the milk house. The Brown family made an important contribution to the Colvin Run area. Arriving in the area a decade before the Civil War, they brought knowledge of better farming techniques, which they were able to share with their neighbors. Brown’s Chapel served as a gathering place for local residents. They are a testament to the contribution newcomers can make to a local community, sharing expertise in ways that make a substantial and enduring different in the local culture and economy.

The Great Falls Grange was formed in 1920, just over 30 years after the formation of the National Grange. Local residents were encountering pricing pressures on their dairy products and needed to negotiate jointly, rather than individually, to be sufficiently effective. By 1929, the local Grange had raised and borrowed enough money to build the Grange building, still standing today. The Grange served to organize and unite a group of local families of mostly farmers into a structure and institution that served their mutual interest in a spirit of collegiality and cooperation.

THE HALLMARK of the Grange was the importance placed on character development, integrity, and shared values. Members were cultivated through a series of “degrees” or levels within the local Grange before participating at the Pomona (county), State, and National levels.

The Grange is noted for giving everyone an equal voice, nurturing skills and values through a structured development program for all members, regardless of age or sex. A landmark to neighborly collegiality and friendship, the Grange stands to call us to a higher level of community involvement and volunteerism.

It is the mission of the Great Falls Historical Society to capture the ever-evolving story of our village, to preserve it for all who come to live here, securing its accessibility for future generations to appreciate and enjoy. GFHS has monthly programs and social events and is present weekly at the Great Falls Farmers Market. www.gfhs.org