What’s on the Horizon for the City of Fairfax
Votes

What’s on the Horizon for the City of Fairfax 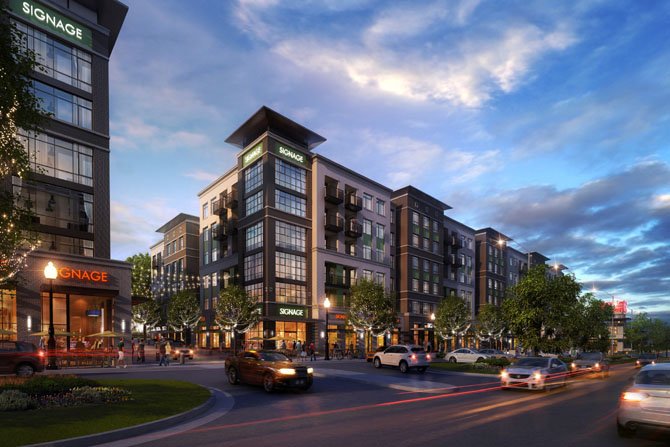 Artist’s rendition of one of the mixed-use buildings planned for Fairfax Boulevard. Shops and restaurants are at street level, with apartments above. Photo by Bonnie Hobbs.

The highly anticipated, $4 million, Old Town Square project is now underway in the City of Fairfax on the block bounded by Main Street, University Drive, North Street and Old Lee Highway. It’s seen as something that’ll attract customers to the downtown businesses and provide a gathering place for friends and family to meet, as well as a site to hold special events.

In addition, a 90-foot, pedestrian safety barrier will be built along the north face of the Auld Shebeen restaurant where the sidewalk grade is lower than the adjacent North Street travel lanes. And the gravel Amoco parking lot at Main/East streets is being paved for better public parking. The pedestrian barrier costs about $230,000, and the parking-lot resurfacing, about $65,000. The remaining $3.7 million is for the park.

A Fairfax icon and beloved, local hangout is reopening. Since 1947, the 29 Diner on Lee Highway in Fairfax attracted people looking for a good meal and a place to spend time with friends. However, the previous owners retired in May and closed the doors.

But local entrepreneur John K. Wood bought the place, revamped it and – with general manager Tom Lowe, a former Navy Seal – will reopen it on Patriot Day, Sept. 11.

“It’s one of four, historical landmarks in the City of Fairfax,” said Billy Reilly, who’s promoting the 29 Diner. “And we’re looking forward to serving the community.”

And they’ll do it in more ways than one. Besides literally serving meals, the restaurant also plans to donate food and raise funds for FACETS, Our Daily Bread and the Lamb Center – all of which help people in need – all year ’round.

Wood obtained the lease in May and work began, the first week of June, to both fix and spruce up the old diner. The parking lot was repaved, new bathrooms were installed and the whole interior was renovated.

“The place is gorgeous now,” said Reilly. “In 2015, there’ll be a complete, historical renovation. But right now, it’s been cleaned and repainted and the kitchen equipment revamped – while still keeping that same diner charm that’s been there since 1947.”

Wood is also delighted with the diner’s facelift and is pleased with the progress that’s been made. “I’m blessed and humbled to be taking over a historical landmark in the City,” he said. “And I’m looking forward to all the good things we can bring to the residents, the homeless, veterans and the needy through the Lord’s work and the diner.”

As for the menu, said Reilly, the restaurant will offer “some old, diner favorites, plus new and exciting fare. It’ll really be something special.”

When the City of Fairfax reconfigured Main and North Streets from one-way to two-way streets in 2006, it did so in hopes that the change would benefit the downtown area. Now, though, the City Council is revisiting that decision.

Making those streets two-way was seen as a way to create a more pedestrian-friendly environment, as envisioned in the City’s plan to revitalize Old Town Fairfax. However, over the past few years, people have noted possibly less vehicles and pedestrians there than before.

So the Council members have authorized an engineering study to review the current conditions and analyze the costs and benefits of reverting back to one-way traffic on those streets.

It’ll cost about $15,000-$20,000 and will be totally funded by money the City receives from the Northern Virginia Transportation Authority for transportation-related purposes. The finished product will include cost estimates of any recommended changes.

It’s still a work in progress, but Novus Fairfax Gateway LLC hopes to transform part of the Kamp Washington triangle between Fairfax Boulevard and Lee Highway into a modern, community-serving, mixed-use project.

The design includes a road network that could mesh with the future redevelopment of the rest of that triangle, while adding traffic-calming elements to reduce cut-through traffic in the nearby Fairchester Woods neighborhood.

However, Fairfax City Councilman Michael DeMarco would like to see more commercial office space there, plus shuttle buses to the Metro station provided for the residents. And Councilman Jeff Greenfield believes the project has too many housing units planned with too few retail attractions. He was also concerned that traffic there might increase.

Councilman David Meyer worried that the project has too high a density and he said associated traffic should be prevented from traveling through the Fairchester Woods and Westmore neighborhoods. And Councilwoman Janice Miller was concerned about the apartments’ affordability, as well as accessibility for senior citizens or disabled veterans.

The applicant is now seeing how it may incorporate the Council’s comments into its plans and is working with City staff on its proffers before bringing this project back before the Council.

In May 2013, the Fairfax County School Board approved boundary changes to alleviate overcrowding at Fairfax High and Lanier Middle School. These changes are being phased in during the 2014-15 school year. This fall’s rising eighth-grade students, juniors and seniors will be allowed to remain at their current schools.

Students living in the Penderbrook and Fairfax Farms areas of the Waples Mill Elementary attendance area were reassigned last year from Lanier to Franklin Middle in Chantilly. Starting in September, these students will also shift from Fairfax High to Oakton High.

Fairfax Circle Plaza is a gateway into the City but, over the years, it turned into an aging strip shopping center. Now, though, a huge, new, mixed-use project will be built there, featuring a grocery store, retail businesses and multifamily housing.

Planned are modern, residential units in a walkable design, with structured parking, instead of surface spaces. The goal is to transform a 1960s shopping center into a world-class place where people may live, work and dine.

Combined Properties Ltd. will redevelop the 9.8-acre site with a 54,000-square-foot grocery store, 34,000 square feet of retail and restaurants and 400 apartments. It also plans a signalized intersection at Fairfax Boulevard.

The project will be done in phases in quick succession, with residential building construction concurrent with a phased occupancy. The grocery-store site must be turned over to the store prior to any residents moving in. And it’s anticipated that Harris Teeter will be the grocery store.

Several members of the City Council would have preferred more retail in this project and the proposed rents to be more affordable. But in the end, they approved it so that this area could be revitalized and the City could benefit from new and more diverse sources of future revenue, while continuing to move forward.