‘Great Falls in the Evening’ at Katie’s Coffee
Votes

‘Great Falls in the Evening’ at Katie’s Coffee 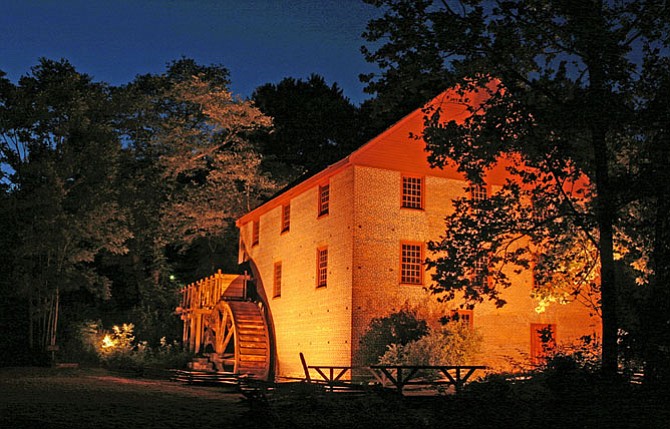 Colvin Run Mill has always been a favorite subject for photographers and painters alike. On an evening in June I started to set up my camera when the water wheel began to move and it kept going faster and faster until it was almost a complete blur like an airplane propeller. After a few minutes at this high speed the wheel began to slow and eventually stopped so I could capture this image using a 25-second exposure. To this day I have no idea why the wheel would ever spin so fast. Photo by Walt Lawrence 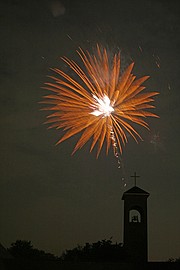 Sign of a Dove: This image was obviously taken on the Fourth of July from behind the Christ the King Lutheran Church on Georgetown Pike. Reverend Paul Gysan, the former Pastor of the church gave me some good advice on where to set up my camera to photograph the fireworks and capture the church bell tower in the foreground. I was particularly struck by the symbolism in this image as the rocket seems to have been fired from the bell tower and the resulting burst has the appearance of a white bird in its center, hence the title, ‘Sign of a Dove.’

The exhibit entitled “Great Falls in the Evening” opened on Dec. 1 and runs through the month of December. The show is part of the longstanding program where Mike Kearney, proprietor of The Old Brogue and Katie’s Coffee, features the work of a different local Great Falls Studios’ artist each month.

“It’s no secret that I have been photographing the river, landmarks, landscapes and wildlife of the Great Falls area for the past 10 years. Earlier this year I began to examine my collection of images and quickly came to the conclusion that I really had a number of different mini or sub collections. One of these mini collections included a number of images that had been taken in the evening in all seasons of the year. I assembled a set of nine for this exhibit which includes a number of well-known landmarks, both past and present, and even a couple of Potomac River waterscapes which are very unusual. All of the images have been printed on canvas and are available in a variety of sizes. Since all of these were taken in the evening I obviously had to use a tripod and some very slow shutter speeds,” said Lawrence.

The author shares and discusses some of the images featured in the exhibit with the Great Falls Connection readers.