Tell Teens ‘Things Will Get Better’ 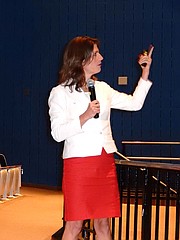 Applied psychologist Heather Tedesco points to a chart on the overhead screen.

In light of recent suicides by students from Fairfax, Woodson and Langley high schools, Fairfax High hosted a meeting Nov. 19 to discuss the problem and search for solutions. The idea was to begin an ongoing exchange between parents, students, staff, community members and mental-health professionals.

“Now in my sixth year as principal, I’m focused on finding ways to foster a culture where people look out for one another,” said Fairfax High’s leader, Dave Goldfarb. “We want this school to be a place where people ask for help and build resiliency. For me, hosting a community dialogue on mental health and wellness is a big part of this work.”

He said that, over the years, he’s become aware of many students struggling with mental distress. And he’s realized that mental health is an issue that significantly impacts the students and school.

Therefore, said Goldfarb, “We have to work together to make it visible. The inner pains our adolescents feel often limit them more than any physical injuries. We have to talk together to make it an open topic for discussion. Anxiety, depression, feeling out of control, suicide – we have to understand that these are all part of our teenagers’ world, and we have to talk openly about them if we want to connect with and support [our children].” 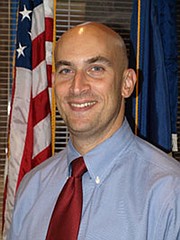 He also stressed that the meeting was just a first step. “Beyond tonight, we need to make brave choices as students, parents and educators to speak out and put our young people’s wellbeing first, over everything else,” said Goldfarb. “Success cannot come at the expense of happiness. We must summon the courage in our hearts to put balance, happiness and inner peace above GPAs, popularity and instant gratification.”

Then Fairfax High’s director of student services, Laura Rotella, and school counselor Tracy Hartley shared some results from the FCPS 2013 Youth Survey on mental health. On average, in the last three years, 29.6 percent of FCPS students in grades eight, 10 and 12 reported feeling sad during the year. In the Fairfax High Pyramid, it was 32.1 percent.

THE PERCENT WHO CONSIDERED SUICIDE during the past year was 17 percent countywide and 19.1 in the Fairfax Pyramid. “In 2013, 22.3 percent of females and 11.2 percent of males in FCPS considered suicide,” said Hartley. “But the social stigma attached to it makes it under-reported.”

Those same figures for students in the Fairfax Pyramid were 25 percent of females and 12.3 percent of males. “It peaks in 10th grade,” said Hartley. “And females report considering suicide twice as much as males, across all grade levels, but males tend to under-report.”

She and Rotella also discussed the “Three to Succeed” concept. Analysis of the Youth Survey revealed that having just three assets dramatically reduces teens’ risk behaviors and promotes thriving youth. Assets are strengths in young people, their families, friends, schools and communities that benefit them emotionally. The more assets a person has, the fewer risk behaviors they report – and every asset makes a difference.

Assets are: Possessing high personal integrity, performing community service, having teachers recognize good work, having trusted adults to talk to, participating in extracurricular activities and having parents available for help.

“When a student said they had none of those, 50 percent of males have considered suicide and 80 percent of females,” said Rotella. “Having four or more assets reduces suicidal attempts from upwards of 10 percent to nearly zero.”

“Female adolescents are twice as likely to commit suicide as boys are,” added Hartley. “But boys tend to use more lethal means, such as guns and gas.”

Another finding of the survey was that, by age 13, more than twice as many girls as boys are depressed – and this ratio continues into adulthood. And it also exists regardless of racial or ethnic background.

Applied psychologist Heather Tedesco also spoke. She’s in private practice in McLean and helps parents address their concerns about their teenagers. At the meeting, she discussed the burdens teens face today and how parents can help them deal with these things.

“Course loads in school are far more rigorous than in previous generations, and teens are involved in more extracurricular activities,” she said. “And because of social media, teens are always aware of what other teens are doing, and vice versa. So it puts more pressure on them and they have less face-to-face interaction.”

AS A RESULT, said Tedesco, “We need to de-stigmatize stress and talk about what we can do about it. We need to send healthy messages about failure and realize that teens need free time and psychological space to develop a strong sense of self.”

“We want our kids to have positive coping methods that they’ve practiced so, when they’re under stress, they can use them,” she explained. “And we must help them recognize and express their emotions.”

To thrive, said Tedesco, teens must be resilient and able to handle challenges. “Tell them that bouncing back is more important than not messing up,” she said. “Give them a message of hope that things will get better, and tell them failure can be an opportunity for growth.”

She said parents should examine their own attitudes about failure. “Parents must provide an unconditionally loving bond,” said Tedesco. “It’s a critical, protective factor in their mental health. And ask open-ended questions about their goals and values, and listen to their answers.”

Teenagers should be given increasing freedoms and responsibilities, she said, but they should also be responsible for their own successes and failures. “Avoid micro-managing and over-parenting, and encourage identity development,” said Tedesco. “Parents need to value psychological health as much as academic and extracurricular achievement. We really have to ask ourselves what really matters to us for our kids’ long-term happiness and success.”

She also told parents to “teach kids there are multiple paths to a successful adulthood. Character traits related to happiness and success include resilience, self-control, curiosity, enthusiasm, zest, self-efficacy and gratitude.” Bottom line, said Tedesco, “It’s not what your teen accomplishes that matters, but who they are.”