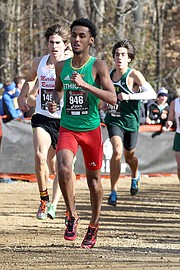 T.C. Williams senior Anteneh Girma qualified for Foot Locker nationals with a sixth-place finish at the South regional meet on Nov. 29 in Charlotte.

This time, the Titan senior earned a trip to San Diego.

Girma placed sixth with a time of 14:59 at the Foot Locker Cross Country Championships South regional meet on Nov. 29 in Charlotte, N.C. The top-10 finish earned Girma a spot in the national meet on Dec. 13 in San Diego.

Girma’s postseason run started with a fourth-place finish at the Conference 7 meet on Oct. 30 at Burke Lake Park. The Titan boys also placed fourth as a team, earning a spot at regionals.

Girma ran with the leaders early in the 6A boys’ race at the VHSL state meet on Nov. 15, and eventually placed sixth with a time of 15:36.

The teams will wear throwback uniforms as part of their annual Parker-Gray, Hoffman-Boston game.

Wakefield has won its last two meetings with T.C. Williams, beating the Titans in the 2012-13 Northern Region tournament and early in the 2013-14 regular season.

Several members of the T.C. Williams football team received all-conference honors, according to a post on the school’s athletics Web site.