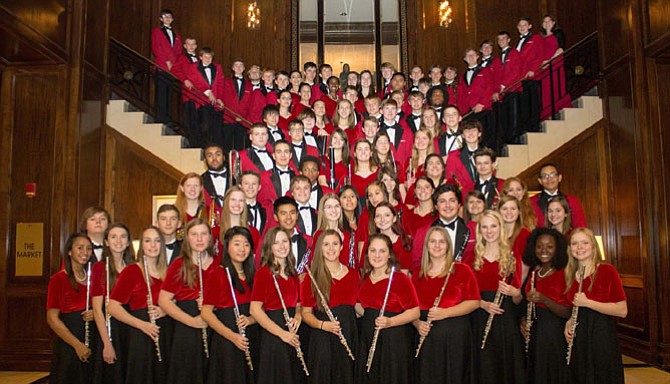 Herndon High Wind Ensemble was one of only three high school bands selected to perform for over 400 music educators from across the state of Virginia. Photo contributed

On Nov. 20, the Herndon High School Wind Ensemble, comprising 81 students, performed at the 2014 Virginia Music Educators Association (“VMEA”) In-Service Conference in Norfolk. After Herndon High Director of Bands Kathleen Jacoby submitted a recording of the Wind Ensemble state assessment performance to the VMEA last Spring, the Wind Ensemble was one of only three high school bands selected to perform for over 400 music educators from across the state of Virginia. This is considered one of the highest honors in the state’s music program, and the students have been preparing for it since August.

The Wind Ensemble played 10 different pieces of contemporary music of varying grade levels. All but two of the pieces were new compositions or new editions published within the last two years. Aimee Toner was featured on flute on “The Three Graces” and Jacob Reeves performed “Xylophonia” on percussion. Both Aimee and Jacob are juniors at Herndon High.

“It was an honor to perform a solo with Wind Ensemble,” said Reeves. “Performing my solo in front of all the educators at VMEA was an awesome experience. It wasn't until the end of our last song that it clicked. Our many extra hours of rehearsal had paid off and we left our mark on the stage.”