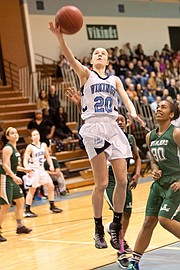 Last year, Whitman lost to Good Counsel, a private school, as part of a 1-2 start. The Vikings then won 20 consecutive games before losing to Kennedy in the sectional final. Whitman went 42-8 during the 2012-13 and 2013-14 seasons, including a trip to the 2013 state playoffs.

The Vikings faced Rockville on Tuesday, after The Almanac’s deadline. The Vikings will face Potomac School at 10:40 a.m. on Saturday, Dec. 13 during the Tina Thompson Classic at St. John’s College High School.

Whitman reached the state championship game but graduated several key players from that team. This year’s roster has nine players listed at 6 feet 2 or taller, including two listed at 6 feet 6.

The Vikings faced Rockville on Tuesday, after The Almanac’s deadline. Whitman will face Landon School at 7 p.m. on Friday, Dec. 12 at Landon and will host Wootton on Dec. 15.

The Churchill boys’ and girls’ basketball teams were within striking distance at the end of their respective season openers against Paint Branch on Dec. 5, but each fell short.

The Churchill boys faced Bullis on Tuesday, after The Almanac’s deadline. The Bulldogs will travel to face Wootton at 7 p.m. on Friday, Dec. 12.

The Bulldogs faced Churchill on Tuesday, after The Almanac’s deadline. Bullis will host Berkeley Carroll from New York as part of the Bullis Holiday Classic at 8:15 p.m. on Friday, Dec. 12.