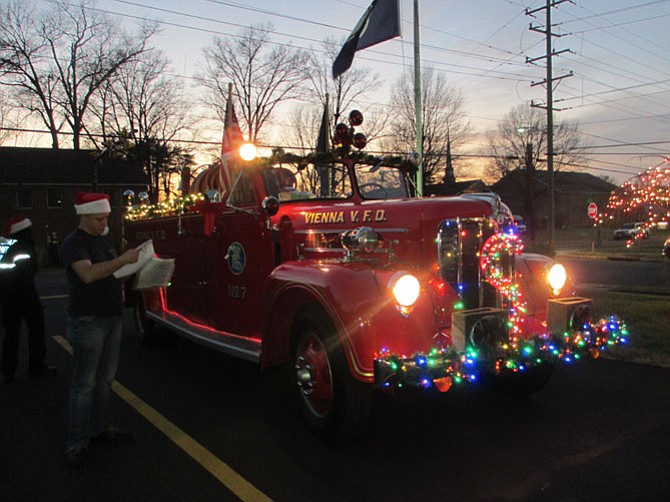 Santa’s antique fire truck is aglow for its evening runs through Vienna. Photo by Donna Manz. 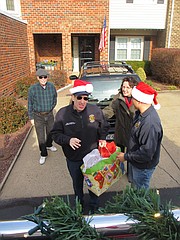 Honorary firefighter Bill Sonntag readies to board VVFD’s antique Maxim fire truck for the launch of the 2014 Santa Run.

When Santa Claus cruises through Vienna-area neighborhoods on an antique fire truck, siren and holiday music blaring through loudspeakers, when North Pole elves dress up as Vienna Volunteer Fire Department [VVFD] EMTs handing out candy canes and dog biscuits, it marks the season of VVFD’s annual week-long Santa Run in the days running up to Christmas.

AT SANTA RUN KICK-OFF ON DEC. 13, families rushed to the curb when they heard the siren and music. They came with babies in their arms and with toddlers on their shoulders, and with jumping dogs with wagging tails. Little kids jumped and screamed for Santa. Grandparents stood at their doors, waving. Even construction workers and laborers paused to wave and snap a cell phone photo. At Meadowlane Park, tennis players waved their rackets as Santa rode by.

Along Maple Avenue and busy side streets, drivers from the opposite direction honked their horns and waved to Santa, while passengers who pulled alongside the fire truck videotaped by cell phone. When driver and elf-in-chief, Matt Snow, spotted groups of children in a Maple Avenue tree lot, he pulled the vehicle in, exciting parents and kids.

EACH OF THE SANTA RUN participants volunteers four-hour blocks of time to produce VVFD’s Santa Run.

Just in case anyone is wondering …VVFD buys 2,500 candy canes for community distribution and a lesser number of dog biscuits. Look for Santa and the fire truck through approximately Dec. 21. Inclement weather may alter the schedule.