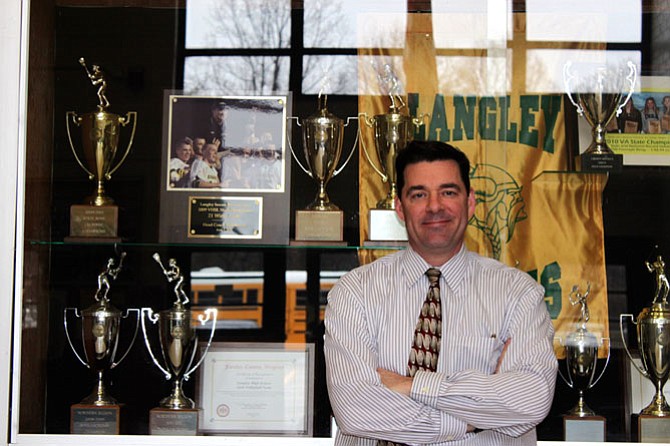 For six years, he was the glue that brought Langley High School (LHS) together.

“South County has spent a long time looking for a qualified principal,” said Ragone. “I think I have the right fit to help a school like South County with qualities that have been dormant at Langley.”

Ragone has spent his entire 22 year education career at Fairfax County Schools. Even further back, he graduated high school from South Lakes High School in Reston.

“I always loved history,” he said. “I remember going to Monticello and downtown D.C., and I would finish our tour guide’s sentences and it would tick everyone off.”

While studying at the University of Mary Washington, he taught swimming over the summers while on break. He said he was amazed that instructions could lead to action. He knew then that he wanted to become a teacher.

After years of being a social studies teacher, however, he realized he wanted more.

“I always thought I was going to be a teacher my entire life,” he said. “I always found it rewarding.”

However, he wanted to reach more than the 150 students who would come through his classroom every week.

“Also, there were things you complain about as a teacher, and I didn’t want to complain anymore,” he said.

AFTER BEING AT FOUR OTHER SCHOOLS, he landed at Langley High. Former Parent Teacher Association President and current Family Network Committee co-Chair Betsy Shomaker worked closely with him for many years, saying he created unity where there was little before.

“I think Matt’s legacy will be his work and effort to change and improve school spirit and school culture,” she said.

Previous to his principalship there, the school celebrated Color Day where different school teams would wear different colors - a practice of rivalry within the school. Ragone decided to change the day to Unity Day, instead, asking students to all wear school colors and stand together.

“He created the school idea of Saxon Country,” said Shomaker. “No matter who you are, we are one.”

Ragone said he was especially proud to have reached out to the students he called the “middle kids,” the students who were neither the disadvantaged nor overachievers.

Although student mental health is widely discussed topic within Fairfax County Public Schools and around the nation, Shomaker said he may have been one of the first people who talked about it five years ago.

She remembered a speech where he said, “Students can’t sacrifice current happiness for future happiness.”

“He was also a rock to the community during some dark times last year,” she said.

Last winter, two Langley students killed themselves during the same week - one on Monday and the other Tuesday - shaking the school system to the core and prompting changes like the addition of Crisis Text and later high school start times.

LaTeef said he was sad when he found out that Ragone - who he called a role model - was leaving in the middle of the year.

“I was looking forward to crossing the stage at graduation and shaking his hand,” he said.

RAGONE is excited for the fresh start and feels he is leaving Langley a better place than how he found it. He knows that he will face different challenges like lower test scores, a more diverse population and a greater percentage of students who are qualified for free or reduced lunch.

“South County is one of those really great places to be,” he said. “You walk in and see that people have so much school spirit. I think that their academics could match their spirit and enthusiasm at the school.”