Arlington-Alexandria Coalition for Homelessness undergoes transformation to “Bridges to Independence.” 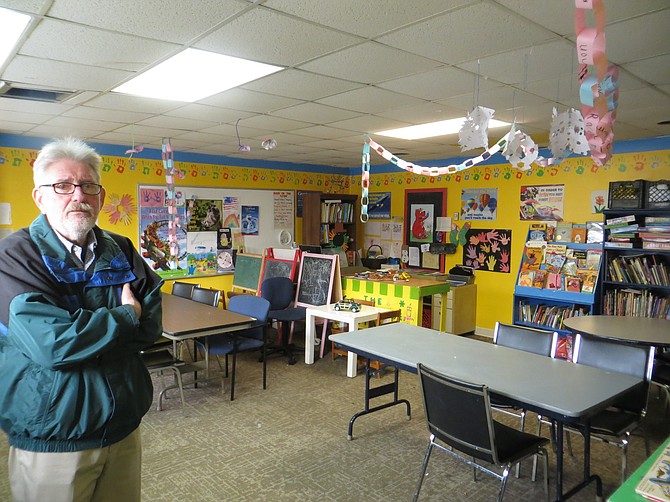 Arlington-Alexandria Coalition for Homelessness Director Michael O’Rourke and one of the program’s play rooms. Photo by Vernon Miles.

At the end of 2014, the Arlington-Alexandria Coalition for the Homeless (AACH) will cease to exist. The organization, with its nearly 30 years of work transitioning homeless families into apartments and houses across Northern Virginia, will be going through a transition itself when it becomes “Bridges to Independence.” According to leadership at the AACH, the change is a long time coming and better reflects the work the organization does.

“When we became the Arlington-Alexandria Coalition for the Homeless in 1985, it was a great name,” said Michael O’Rourke, director of the AACH, “but it doesn’t say what we do now and it provides some challenges to us.”

While the AACH started out as a homeless shelter, O’Rourke says their aims over the years have moved more towards educating their clients and working with them towards being able to live on their own. As Bridges to Independence, the organization hopes to expand its programs with clients who are at risk of losing their home to keep them housed and reform their budget before they enter homelessness.

Like many of its clients, the AACH will be finding a new home in the spring. As part of its transition, the AACH is losing one of its sites that currently houses its offices, a children’s play room, and a tech classroom. The classroom is complete with a smart-board and teleconferencing capabilities, part of a $25,000 tech grant from NBC. The servers and much of the office equipment came from Hillary Clinton’s campaign for Presidency six years ago, when her Arlington headquartered campaign sold off the equipment at a cheap price. O’Rourke says he’s looking forward to Hillary Clinton running again, if only because it will mean they get upgraded equipment. These facilities will be replaced by a new headquarters that operates out of the first floor of new building going up on their headquarters at the corner of North Highland Street and 10th Street North.

The organization operates on an annual budget of $1.7 million. Eighty-five percent of its funding goes to program services and 15 percent goes into staff management. The majority of their budget comes from its contract with Arlington County to operate the shelter, a grant from Housing and Urban Development in Alexandria, and government contracts from the state.

“It’s not just a donation, they come with things we’re supposed to accomplish,” said O’Rourke. “For the most part, [our funding is] either a contract or a grant.”

“One is the shelter, transitional for families, expected to live independently,” said O’Rourke. “The second program is much bigger but not as visible, we call it ‘Adopt a Family.’ It’s a rent subsidy program funded by HUD and some by Arlington County. “

The shelter just celebrated its largest “graduating class,” with 26 families moving into independence this year. The second program helps roughly 20 families find their own apartments, sign their own leases and live with subsidized rent in their own apartment. While the AACH initially pays most of the bill, their support is gradually reduced as they help the resident manage their finances. Some people in this second program are graduates of the first.

“We work with them,” said O’Rourke. “We subsidize their rental payment every month with a gradually declining basis and provide intense case management so that when we feel they’re ready to move out on their own independently, they are ready.”

Clients come to the AACH through Arlington and Alexandria Department of Human Services. Every week, there are a couple of shelters in the area, and they divide up those who have been listed as needing shelter.

“It’s one thing to get them in a house, it’s another thing to keep them,” said O’Rourke. “They work on everything from life skills, job readiness, education … things that support them remaining in their own house .… We don’t want them to be here too long. This is a transitional facility, we want them to come here, stabilize, and normalize. If they don’t have a job, get a job. If they have a job, stabilize the job.”

O’Rourke, whose worked at AACH for nine years, is still the considered the new guy by the other staff. He has a military background, having worked in the Pentagon and contracting before transitioning into charity. O’Rourke emphasized that residents who don’t follow the organization’s rules are kicked out. There’s a curfew, there’s no alcohol, no drugs, and all of the income residents earn is given over to the organization to pay for food or other necessities for the client.

“It’s training, it’s not punitive,” said O’Rourke. “We’re helping them learn how to live within a budget. If they get a check from work or social security, they turn that over and it’s kept in an account for them. It is [difficult], but they agree to abide by our rules when they come in and if they don’t want to abide by that rule, they don’t have to, and they don’t have to live here.”

Much of the focus of the program is on treating the psychological trauma that occurs when a person first becomes homeless.

“We want to be part of a normalization and stabilization process,” said O’Rourke. “What caused them to become homeless? Help them resolve that, help them get the kids on point in school and help them get a job. Get ready to move forward. That’s what the case managers do. They might be here five or six weeks and say they’re ready to move on.”

Homelessness can be particularly traumatic for children in a family. Sam Kelly, deputy director of programs, was a children’s case manager before his promotion and still spends most of his time working with children of homeless families.

“It’s challenging,” said Kelly, “not only dealing with the problems of the kids, but have to have some level of understanding of the parents and their levels of parenting and how all of that comes together to form the child’s values.”

Kelly says working with children is the easy part of the job. Working with parents,some of whom are unable to provide the structure or guidance the children need, is much more challenging.

One of the newest programs AACH provides for children in their care is a Youth Leadership Academy that began last year. It started with six students and emphasized work in education, health nutrition, career exploration and community service. This year, the program has grown to 25 students and has partnered with the Smithsonian Institute to offer internships and job shadowing opportunities for high school students.

“We were really fortunate to land that one,” said Kelly. “All six of our kids last year were able to do two-week internships at the museums. Two applied for a specialized internship for a youth engagement through science program, and both were accepted. Out of 250 applicants, they chose 10. Two of those 10 were our kids.”

For youth in the AACH currently in high school, Kelly has been in talks with Arlington County Public Schools to make sure that any of the youths who have a desire to attend Northern Virginia Community College will at least be able to go through the application process. If the child doesn’t want to attend college, Kelly helps set them up with a vocational or trade school to be able to transition from the AACH into a career.

“We operate a lemonade stand in the summer as part of our financial literacy initiative and small business initiative for our kids,” said Kelly. “These are the younger, elementary kids, and our youth leadership academy kids supervise the process. We do everything from purchase limits, cut the lemons, look at gain and profit losses, it’s really cool. This year, we’re expanding that a little bit, Wells Fargo is coming in to do a series of financial literacy training for all of our kids. Not everyone can get an internship they want or desire, but everything, as little as watching a lemonade stand, can provide leadership experience.”

The focus on education and fiscal responsibility extends to parents as well as the children. Of AACH graduates, 85 percent do not go back into homelessness. In the last four years, five clients have bought homes in Northern Virginia.

“They’re not living in the poshest neighborhood, but they developed good habits and bought homes,” said O’Rourke. “We have clients that have served on the board of directors, are employees here, or come back and work as volunteers. From homelessness to home owner, what a quantum leap.”