Representing Students on School Board
Votes

Representing Students on School Board 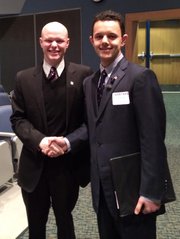 Harris LaTeef, a junior at Langley High School, has been elected by the countywide Student Advisory Council (SAC) to serve a one-year term as student representative to the Fairfax County School Board, beginning July 1. LaTeef will participate in School Board meetings as a nonvoting member, filling the position currently held by Will Ashe, a senior at Thomas Jefferson High School for Science and Technology. LaTeef will be the 44th student representative to the School Board.

LaTeef said he sought the job as student representative because, as a young FCPS student, he saw “firsthand what one student can accomplish” when he takes the initiative. When he was a third grade student at Colvin Run Elementary School, he started a petition to nominate his bus driver, Nancy Gunderman, as Fairfax County Public Schools (FCPS) Support Employee of the Year. Gunderman’s knack of making the rides to and from school “an exciting learning experience through her use of games, prizes, and even the occasional in-bus movie” made her the ideal candidate for the award. When she was named a finalist, then-principal Sandra Furick was asked to speak about Gunderman to the FCPS Leadership Team, but Furick asked LaTeef to speak instead. Gunderman was named the 2006 Support Employee of the Year, the first bus driver to receive the award. LaTeef accompanied her to a School Board meeting, where she received her award, and was able to meet Board members and then-Superintendent Jack D. Dale.

LaTeef cited three issues as being critical for FCPS students: reducing any negative effects of budget cuts on students; amending high school start times; and ensuring that any changes to the district’s disciplinary policy is “just, yet firm when addressing serious infractions.”

At Langley, LaTeef is co-chairman of the Relay for Life fundraiser for the American Cancer Society, which has a personal connection for him. He manages and organizes meetings for the 40-member committee, helps publicize events, and incorporates student suggestions into the program. LaTeef also serves as director of public relations for The Saxon Scope, Langley High’s newsmagazine and website; is on the student advisory team of the Newseum; and volunteers at the Reston Hospital Center maternity and surgical waiting wing. He has taken honors and Advanced Placement (AP) courses and is currently enrolled in AP Microeconomics and AP Macroeconomics, AP U.S. History, A.P. English Language and Composition, physics, probability and statistics, Latin, and journalism. As a senior, he plans to take AP U.S. and Comparative Government, AP English Literature and Composition, human anatomy, pre-calculus, Latin, journalism, and ceramics.