Senior will compete on vault in Virginia Beach. 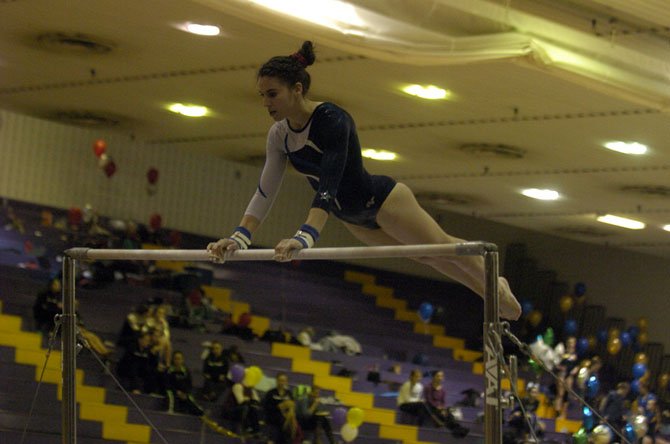 West Potomac senior Monica Thompson competed in the all-around during the 6A North region gymnastics meet on Feb. 18 at Lake Braddock. Photo by Craig Sterbutzel. 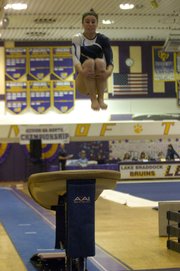 West Potomac’s Monica Thompson earned a state berth on vault during the 6A North region meet on Feb. 18 at Lake Braddock.

Thompson finished in a fourth-place tie on vault with a score of 9.55, earning her a berth in the state meet. The top five in each event qualified for the state meet, as well as the top three all-around competitors and the top two teams.

“It’s really exciting because it’s senior year, so I really wanted to make it on at least vault,” Thompson said. “I’m very happy.”

“That was the one event I thought she had a good shot of going [to states] on,” West Potomac coach Pete Novgrod said. “She had to hit it and she did.”

“I thought I did pretty well,” Thompson said. “It was one of my better meets. The only thing I was upset about was I forgot to do a skill on beam, which brought my score down. Besides that, I thought it was one of my best meets. I was excited.”

“It’s really exciting because it’s senior year, so I really wanted to make it on at least vault. I’m very happy.”

Thompson is a club gymnast with Arlington Aerials.

The state meet is scheduled for Feb. 21-22 at Salem High School in Virginia Beach.