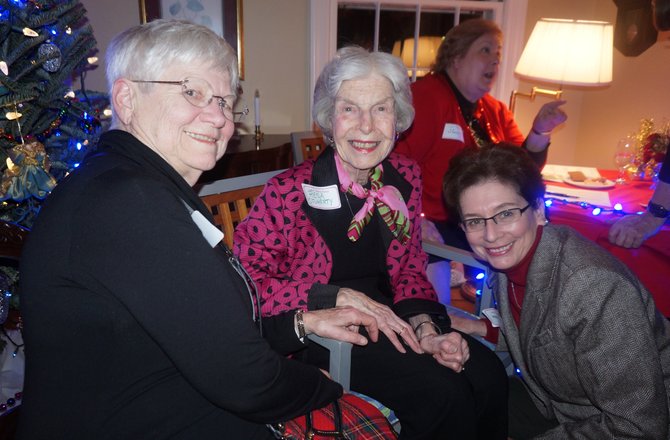 More than 150 women from throughout the community gathered together Dec. 15 for the 43rd annual Women's Sherry Party, an evening made bittersweet by the recent passing of two of the event's founders.

"It's hard to believe Vola and Lois are not here," said vice Mayor Allison Silberberg of Vola Lawson and Lois Walker. "I can still see Vola sitting in her usual chair and Lois checking everyone in at the door."

Held for the fifth year in a row at the home of Arthur Peabody and his wife, Lucy Thomson, the Sherry Party was started by some of Alexandria's most influential women as an alternative to the many all-male events taking place in the city at that time.

Former City Councilwoman Lois Walker, who died Oct. 14, and former City Manager Vola Lawson, were two of the original founders of the event. In the days prior to her sudden death Dec. 10, Lawson talked of the history behind the Sherry Party.

"The Sherry Party has always been a gathering of women who contribute to make the city work," Lawson said the week prior to the event. "Whether it is through politics, social services or their churches, these women are the 'doers' of the community."

In addition to Lawson and Walker, other founders of the event were Beverly Beidler, Doris Mela, Beverly Steel and Jan Killelea.

Lawson was proud to see the Sherry Party grow into one of the most popular events of the holiday season. "We wanted a way to come together to recognize and celebrate what the women of this city were doing," she said, "and I think we accomplished that."

Photos were on display of Walker and Lawson, who had both been named Living Legends of Alexandria.

"This is a great tradition," said former state Sen. Patsy Ticer. "It won't ever be the same without Vola and Lois but tonight is a wonderful tribute to them and all they did for the city."