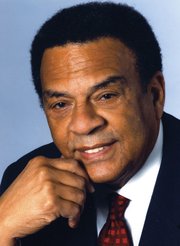 In observance of the Martin Luther King, Jr. holiday, the Alden at the McLean Community Center is presenting Ambassador Andrew Young: “A Continuing Legacy,” at 8 p.m. on Friday, Jan. 17. Young, whose efforts have served and shaped the country for more than 50 years, will share personal memories of Dr. King and his years in the Civil Rights movement. Tickets are $20, $10 for MCC district residents. The Alden is located at 1234 Ingleside Avenue, inside the McLean Community Center.

Before Andrew Young became a U.S. congressman, a United Nations Ambassador and the Mayor of Atlanta, he was a trailblazer. A friend and aide to civil rights leader Martin Luther King, Jr., Young bore witness to—and was at the frontlines of—many of the historic events that defined the 20th century in America. He confronted segregation with Dr. King and galvanized a movement that transformed a nation through non-violence. Young was a key strategist and negotiator during the Civil Rights campaigns in Birmingham and Selma that resulted in the passage of the Civil Rights Act of 1964 and the Voting Rights Act of 1965. Reflecting on his experiences, Young will inspire and challenge audience members to continue to push toward peace and justice throughout the world.