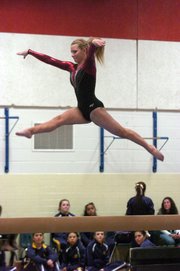 Alexa Bradley isn’t as good as she used to be and admits she probably never will be.

But these days, the Herndon freshman is having fun with gymnastics and recently showed she still has plenty of ability.

Bradley, 14, won the all-around competition at a home meet on Jan. 16. The Hornets placed second as a team, finishing behind first-place Stone Bridge.

Bradley started competing at the club level when she was 3 years old and progressed to a level 8 gymnast at Dulles Gymnastics Academy in Sterling before stopping at age 13. Now a freshman, Bradley got back into gymnastics at the high school level and also competes for the Herndon cheerleading team.

“I did it for my mom,” Bradley said about returning to gymnastics. “She really loves gymnastics and high school is not that big of a commitment. I wanted to make her happy.”

Bradley said she used to train four hours a day, five times a week while competing at the club level. At the high school level, she trains for 90 minutes four times a week. While her skills aren't where they used to be, Bradley said being part of the Herndon gymnastics team brings more fun and less pressure.

“I was so rusty,” Bradley said about her return to gymnastics. “It took me awhile to get back into it --- I’m still getting back into it. I still haven’t fully peaked. I never will be as good as I used to be because I was training so much. … It was really frustrating when I couldn’t complete my routines. I would be like, why? I’ve done this so many times before. I can do it again. You’ve just got to stay confident. You’ve got to keep pushing and trying again.”

“It was really frustrating when I couldn’t complete my routines. I would be like, why? I’ve done this so many times before. I can do it again. You’ve just got to stay confident. You’ve got to keep pushing and trying again.”

“Part of it is mental in the sense that the club scene is extremely demanding and it’s rigorous, and the high school venue is more fun,” Naquin said. “It’s lighter and I think that’s helped her transition easily back into it, where there’s not as much stress. She’s picked up the skills very easily. She’s very coachable.”

“She’s had hip surgery,” Naquin said. “For her just to actually be here and compete at this level is respectable.”

Herndon will compete in a home meet on Jan. 30, starting at 6:30 p.m. The Conference 5 meet will be held on Feb. 6 at Centreville High School.