Local Students Perform in ‘Beauty and the Beast Jr.’
Votes

Local Students Perform in ‘Beauty and the Beast Jr.’

Musical to be presented by Bravo@Kat. 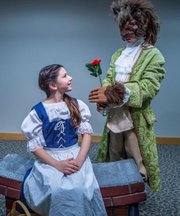 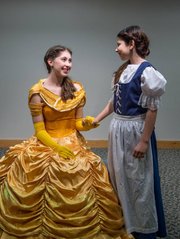 Everyone loves the story and musical score of the whimsical “Beauty and the Beast” — the Tony award- winning Disney stage production that took Broadway by a storm in 1994. Based on the 1991 film of the same name, which was in turn adapted from the French fairy tale by Jeanne-Marie Le Prince de Beaumont, “Beauty and the Beast” tells the story of a prince who is transformed into a hideous beast as punishment for his cruel and selfish ways, and an adventurous young woman named Belle whom he imprisons in his castle. In order to become human again, the Beast must earn Belle's love before it's too late.

Bravo@Kat is a local theatre program for young artists - one that attracts talent from all around the D.C. metropolitan area. The cast is led by two Beasts – 15-year-old Zach Conneen, who will be appearing in episodes of “Modern Family” as a guest star, and Ethan Miller who will literally step from one stage to another when Signature Theatre’s production of “Gypsy” closes the day before “Beauty and the Beast Jr.” opens. Both performers are veterans of Bravo@Kat, and play opposite Marjorie Long and Leah Fox — two Belles. Ethan, Marjorie and nine other cast members are Potomac residents.

“Disney’s well-deserved reputation for quality family entertainment is what prompted Bravo@Kat to present a spectacular double cast of talent for six shows of ‘Beauty and the Beast Jr.,’” said Executive Producer Laurie Levy Issembert. “With a cast of 51 young artists, featuring students in grades 3-9 from all over the metropolitan area, award-winning Director/Choreographer Darnell Morris and Music Director Mayumi Baker Griffie have crafted a show whose message resonates with the creative sentimentality of the youthful cast. And, as always, Laurie Levy reaches out to include ingénues in grades 1 and 2 who are just ‘breaking into the business.’ They will be the adorable teacups wishing you to ‘Be Our Guest’ at the cold late January performances when they will warm your heart and leave you bubbling with excitement.”

Josie Weinberg, an 8th grade student at Herbert Hoover Middle School, said, “Beauty and the Beast is a classic show that I've loved since I was a little girl. The show teaches us that beauty isn't all that meets the eye and sometimes we have to look beneath the surface. Bringing the story we all know and cherish to life on stage is a wonderful experience. Performing with some of my best friends makes it even better. With this show I've been able to expand on my acting skills because I'm playing a character (Mrs. Potts) who is different from the usual roles I play.”

Ethan Miller, also a student at Hoover Middle School, has been with Bravo@Kat since they began. He said, “I really enjoy working with the cast and directors of the show and have learned a lot. A lot of the cast have been in shows together in the past, and we really enjoy spending time together and bonding throughout the rehearsal process.” Through her involvement with Bravo@Kat, 5th grader Anna Corbin has learned “how much work it takes to make a wonderful show.”

The parents must also be committed to the program. “We couldn’t do it without the support and volunteerism of the parents, grandparents and families,” said Issembert.