Along the Postal Route
Votes

Along the Postal Route

It was the beginning of what was about to be a record-breaking hot day. The postal employees were gathered around listening to an explanation of the symptoms of heatstroke, what to do about it and the benefits of drinking a lot of water.

Mario Viray had already been at the post office for almost two hours pulling down the mail, which is sorting the first class mail into his 400 metal dividers with addresses. This constituted his delivery units for Route 105 in Rosemont. He adds the "flats"which are the brochures and catalogs and also the packages and loads it all into a large bin with wheels to take it to his mail truck in the lot. Since Viray began at this post office 16 years ago, he has noticed first class mail diminish and "flats" deliveries grow larger. "Of course each day is different, but generally I have thousands of pieces of mail."

Before he leaves the post office, he checks the "hot case" for misidentified mail, and codes in the time when he begins his route. "I probably walk about six miles a day," he said. "We work eight hour shifts — two hours preparing and six hours delivering with 30 minutes for lunch." Pointing to the station across the way, Viray said, "We are short on staff so when I finish my route I'll spend an hour delivering part of that route. Walking so much helps me although I go slower than I used to, not the same as before. But on the other hand when we're not delivering I feel lousy." He says his father was the postmaster at their small town in the Philippines.

Viray drives his mail truck about five minutes from the Wythe Street Post Office to the beginning of his route. He parks the truck, puts on his brimmed blue hat, slings his mail pouch over his shoulder, and heads for his first house across the street.

As he walks up the brick steps of a large two-storied residence, he puts the mail in a basket on the porch. "I like my route because it is very nice, an older established residential neighborhood, although part of it is hilly. I have had only four routes in 16 years and have been here just less than a year. I bid on this route last year when someone retired and it became available."

At the end of the block he clicked on an inconspicuous USPS label on the back of a road sign with a handheld device. "That's so they know I was here."

"Of course weather is a constant factor in your job. Spring and fall are the best and summer is the hardest but you just drink lots of water. Once during a big snowstorm, I did slip and fall. Some people don't shovel but you can't blame them if it is still snowing. But,” he said, "rain is worse than snow because you have to constantly be thinking about keeping the mail dry." He pointed out that the postal workers get a $399 clothing allowance so they can buy rain gear or winter boots or whatever they need for the weather. "Benefits are good."

"This is a good, steady job. But one of the worst days I had was when a dog bit me. I don't know what kind it was and it wasn't really a big dog, but I didn't see him sitting there and he just jumped up and clamped onto my leg. There is a protocol for reporting and treatment if something like this happens." He said, " I know all of the names on my route but not too many of the people personally." But Viray said that people do nice things like give him ice water when it is hot or sodas. He said with a smile, "at Christmas sometimes they give wine or gifts." 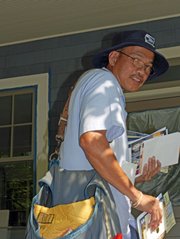 On a sweltering June day, Mario Viray begins his route of 400 delivery units in a shady block in the Rosemont area of Alexandria.

Mario Viray clocks out the time he begins his route before he wheels his cart stacked high with mail out to the parking lot to load up his delivery truck.