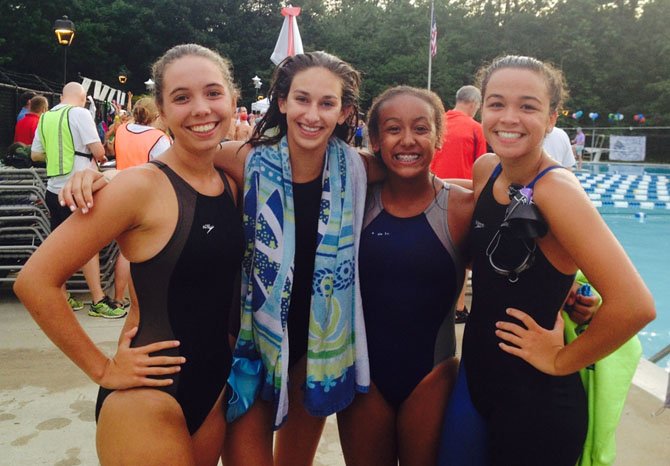 The Sully Station II Piranhas had an eventful week of fast swims and family fun. The thrills began on Wednesday, July 9, with the Divisional Relay Carnival, where the team’s cheerfulness and camaraderie was once again on display. The atmosphere was electric, resulting in the first team record of the season.

The 13-14 girls broke last year’s 200 medley relay record with the powerful combination of Lauren Peters, Georgia Stamper, Hope Alston, and Karenna Hall. With a scorching time of 2:17.34, the girls earned a spot in next week’s All-Star Relays. Joining them at All-Stars will be 11-12 girls Delaney Kennedy, Daeun Lee, Taylor Smith and Faith Alston, who tore up the pool in the 100 freestyle relay.

Three days later, the Piranhas took their talent to the Mantua pool where the 11-12 girls enjoyed another dominant performance. The girls captured wins in all four individual events on the shoulders of Faith Alston in free (31.04) and backstroke (38.77) and Taylor Smith in breaststroke (42.00) and fly (37.09). They were joined in victory by double-event winners Angela Cai in free (37.00) and breaststroke (46.44) and Madisyn Graham in free (30.57) and fly (33.07).

The week culminated on Saturday, July 12, in one of the most anticipated traditions of the season: Family Fun Night. Swimmers and parents alike enjoyed pool games, crazy relays and the annual belly flop contest. The crowd went wild as several dads created terrific splashes, including Eric Stalfort, Matt Cervarich, Pat Morris, Shah Alston, and reigning champion Scott Bundy. Even SS2 lifeguard Duson got into the act with quite a doozy.

SS2 will bring their competitive drive and joyful spirit to Crosspointe for their last A meet of the season next Saturday, July 19.

The Virginia Run Riptide claimed two victories during this fourth week of the NVSL summer swim season with a win at Wednesday’s Divisional Relay Carnival and a convincing win of 279-140 over Popular Heights at Saturday’s home A meet.

Not only did the Riptide bring home the Division 6 relay trophy, but they sent eight teams to the NVSL All-Star Relays on July 16. Three relay teams set new Riptide records at the Relay Carnival. The boys’ 200M freestyle mixed-age team of Anthony Arcomona (11-12), Jason Cheifetz (9-10), Geoffrey Eisenhart (13-14), and Joey Castro (15-18) broke a seven-year-old record with a swim of 1:57.46.

Enjoying the benefit of swimming at home for the first time this year, a dominant performance was the order of the day for the Riptide relay teams as 10 of 12 races were won by Virginia Run.