Temporary Fire Station To Be Constructed In Herndon
Votes

Temporary Fire Station To Be Constructed In Herndon

New fire station expected to be complete by spring of 2016. 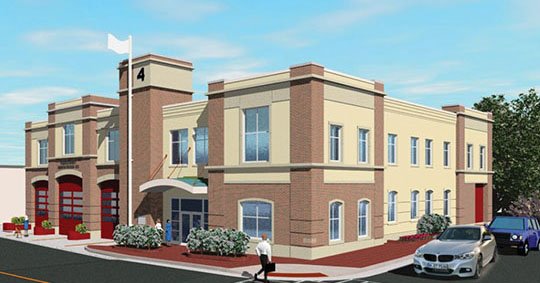 Image of proposed new fire station at which will be constructed on Spring Street. Image courtesy of Fairfax County Department of Public Works and Environmental Services

The vacant Horn Motor's lot on Locust Street, at the intersection of Center Street in Herndon, will soon be host to a temporary fire station. The land is being leased by Fairfax County, and is part of a renovation process for a new fire station facility which will replace the current one located on Spring Street. The original station was built in 1950 and according to fire officials cannot accommodate newer, larger-sized vehicles such as ladder trucks.

A chain link fence currently surrounds the location empty lot at Locust Street, at the intersection of Center Street in Herndon where a temporary fire station will be constructed.

Since 1995 officials have been looking for a new location for the fire station. Ultimately it was decided to tear down the station and build a new one at the cost of over $13 million. “The fire station is a great example of a cooperative project between the Town and Fairfax County,” said Mayor Lisa Merkel. “County and Town staff worked together, and with the Heritage Preservation Review Board to ensure that this new facility marries well with our downtown.”

THE PROJECT is funded through a bond referendum Fairfax County voters approved last November. The current two-story, 8,162 square foot fire station on Spring Street is the oldest fire station still in operation in Fairfax County. Currently the station employs six firefighters. Additional space at a new structure will allow the station to add specialty units as needed, such as a rescue unit or a second transport unit. As currently planned, it will have a maximum height of 38 feet for the elevator tower and 32 feet for the rest of the building.

“This is a totally new urban design for a fire station,” said Kimberly Callahan, project manager with the Fairfax County Department of Public Works and Environmental Services. The temporary fire station will include a 2,683 square foot trailer with dormitory and administration space and a 2,570 square foot tent for fire gear apparatus. The new replacement station is designed by Zivik & Hurdle Architects based in Fairfax. The contractors for the new station are Biscayne Contractors based in Alexandria.

Some have questioned the idea of demolishing and reconstructing the fire station. “I was very disappointed when Fairfax County decided to renovate the existing fire station in Herndon instead of building a new facility at 397 Herndon Parkway,” stated Herndon town council member Dave Kirby. “This site would have allowed for a full standard and modern facility with front and a rear bay access and it would accommodate larger vehicles.”

THE EXPECTED COMPLETION of the fire station project has been moved from the summer of 2015 to spring of 2016. “County staff has worked closely with the Town of Herndon in planning for the site,” stated Fairfax County Supervisor John Foust (D-Dranesville). “The County considered many possible locations for the new Herndon station over the past decade. After an exhaustive review, the current site was deemed the best for service response time and for cost of construction.” Once construction of the new fire station is complete the temporary site will be restored to its original condition.

Residential population in the station’s coverage area is expected to increase over the next 15 years, partially due to higher densities and commercial development that will come with the Silver Line Metrorail. A housing development is under construction near Vine Street less than a mile from the fire station in downtown Herndon. The new fire station will be approximately 14,500 square feet and two stories, and will include larger women’s facilities, decontamination facilities, meet all Americans with Disabilities Act standards and will contain fitness facilities for the firefighters.

Fire stations are located within the county in relation to other station, with a seven-minute response time for emergencies to 95 percent of the county’s population.