‘They’re Thinking Beyond Themselves’
Votes

‘They’re Thinking Beyond Themselves’ 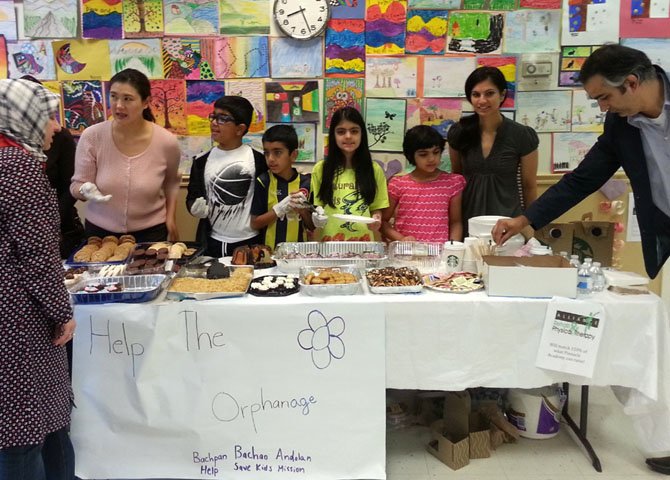 Wearing yellow shirts, Kushaan and Medhnaa Saran work at the bake sale with their friends. Photo Courtesy of Geeta Trehan

Even children can make a difference in the world, and a Vienna brother and sister are doing just that. After hearing of the child kidnappings in Nigeria, siblings Medhnaa and Kushaan Saran decided to raise money for a nonprofit that combats child exploitation, labor and trafficking.

They’re of Indian descent, so they’re helping Bachpan Bachao Andolan (BBA), which works mainly in India, Pakistan and Nepal. And thanks to their efforts, plus a match from a local business, they raised more than $3,000.

Both attend Pinnacle Academy in Oakton. Medhnaa, 10, is a rising fifth-grader, and her brother, Kushaan, almost 9, is a rising fourth-grader. And they and their parents will journey to India this summer to deliver the proceeds to the orphanage in person.

“I’m really proud of them because kids their age can be a bit selfish,” said their mom, Geeta Trehan. “I’m so happy that they’re thinking beyond themselves and about what they can do for other children.”

She’s from Maryland but, as a child, she accompanied her own mother to an all-girls orphanage in India. “My mom’s into protecting girls,” explained Trehan. “We’d give them food, talk to them and give them books to help educate them. And it taught me how fortunate we were in the U.S.”

Now, when she and her husband and children travel to India to visit relatives, they visit a boys’ orphanage in Rajasthan. “There’s no air conditioning or heated water and they bathe with a bucket,” said Trehan. “Each child only has two pair of clothes, and they have no toys; they use twigs to play cricket. They farm and cook for themselves.”

The orphanage isn’t faith-based, but teaches the children to embrace peace and accept all religions. Trehan said the children there either don’t have parents or have been rescued after being kidnapped from their parents for payment of a debt.

(From left) Kushaan and Medhnaa Saran with their sign advertising the bake sale.

BBA provides them with a free quality education, access to a psychologist and improved living conditions within their orphanage, where more than 50 boys stay. When the Vienna family visits, they bring clothes and books, give them a dance party and play ball with the children.

But this year, Medhnaa and Kushaan wanted to do more. “My daughter loves to bake and has always talked about raising money for the orphanage,” said Trehan. “So she talked with Pinnacle’s principal to get permission to hold a bake sale at school. My son’s into soccer and wanted to hold a soccer tournament to raise money, but that didn’t pan out.”

The bake sale, however, was a big success. Medhnaa and Kushaan told their classmates about it, plus children in the neighborhood, to get donations of baked goods to sell. The children made signs to advertise the event and many parents donated money and volunteered to help.

It was held, the end of May. In the morning, the children sold items including doughnuts and brownies in the school cafeteria. And at lunchtime and school dismissal in the afternoon, hot dogs and hamburgers were also available. In the afternoon, the bake sale was moved in front of the school so parents could buy some treats when they picked up their children.

“It went better than I expected,” said Medhnaa, who also enjoys playing golf when she’s not cooking. For the bake sale, she made desserts and Indian food. It was important to do, she said, because “the kids in the orphanage don’t have that much education and don’t get as many things as we do, so I wanted to help them.”

Kushaan was looking forward to visiting the orphanage so he could “play cricket with the children and teach them English.” He wanted to raise money for them “so they can have a better education and more fun.” His favorite part of the bake sale was “eating all the sweets – especially the frosted cookies.”

The event raised $1,235, and Alliance Rehab and Physical Therapy – where Trehan works – pledged to match 150 percent of the proceeds. So Alliance donated $1,853, bringing the fundraising total to $3,089. “BBA will get the check from Alliance,” said Trehan. “And with the bake-sale cash we’ll buy shirts, blankets, books, school supplies and workbooks for the children in the orphanage when we land in Delhi because they’ll cost less there.”

She said the experiences Medhnaa and Kushaan have in India are “something that’s grounded them, as well, and made them realize how lucky and blessed they are in the U.S. to have the education and resources they have. They’re thankful for their home, too, and a family they can depend on.”

Besides that, said Trehan, “As parents, we can teach them to feel for other kids and have compassion and reach out. They learn that the small things we do here can make such a big difference to the children there, and that a small fraction of their time means so much to others.”