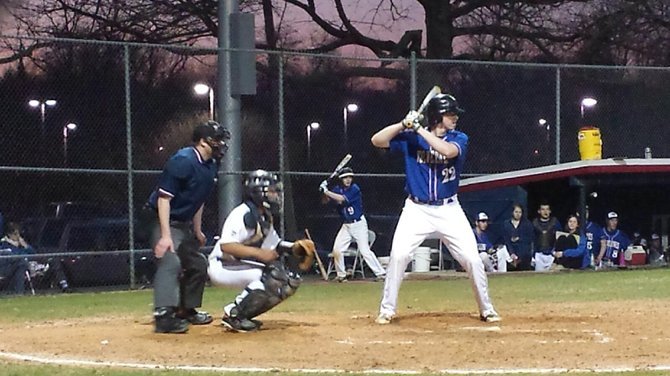 Billy Lescher joined the West Potomac varsity baseball team at the end of his sophomore season and was a key contributor during his junior and senior campaigns.

In 2013, Lescher threw a perfect game during an 11-0 season-opening victory over Mount Vernon. West Potomac went on to reach the Patriot District semifinals and Lescher received honorable mention as a pitcher.

As a senior, Lescher garnered second-team all-conference honors and helped the Wolverines finish runner-up in Conference 7.

Lescher will continue his baseball career as a pitcher at the University of Pennsylvania. He recently participated in a Q&A via email.

Q&A: What made Penn the right fit for you?

Lescher: Penn is in a great city [Philadelphia] and I loved the campus, coaches, and the players.

Q&A: What was your reaction when you were accepted into an Ivy League school?

Lescher: I was ecstatic. It's an honor to be going there.

Q&A: What will your major be? What position will you play?

Lescher: I'm not really sure what I'll be majoring in but I'm thinking international relations. And I'll be pitching.

Q&A: At what age did you start playing baseball? Have you always been a pitcher? When did you realize playing college baseball was a possibility for you?

Lescher: I started playing baseball when I was 4. And yes, I have always wanted to be a pitcher. I thought it was the coolest position because of how the pitcher controls the game. I realized college baseball was a possibility during the summer going into my senior year. I was on a showcase team and I noticed that I had begun throwing much harder with better pitches and pitch control.

Q&A: How many years were you on the West Potomac varsity?

Lescher: I got called up to the varsity team toward the end of my sophomore year and then played my junior and senior years.

Q&A: What position(s) did you play when you weren't pitching?

Lescher: When I wasn't pitching I was playing first base, which was a blast to play.

Q&A: Did you play any other sports at West Potomac?

Lescher: At West Potomac, I was a member of the swim team my freshman and sophomore years, and did dive team my junior year.

Q&A: What is your favorite memory of playing high school baseball?

Lescher: My favorite memory while playing baseball at WP would be either throwing a perfect game against Mount Vernon my junior year or just playing baseball every day with my best friends.

Q&A: If you could go back and change one thing about your high school athletic career, what would it be?

Lescher: If I could to go back and change one thing during my high school athletic career I would probably have worked harder in the offseason during my earlier years. Would've helped my game when I was younger.

Q&A: What are you most looking forward to about the transition from high school to college?

Lescher: I'm most looking forward to meeting my new teammates and getting to play at the next level.

Q&A: What is your favorite food?

Lescher: Favorite food is a tough question, but I'm going to have to go with tacos.

Q&A: Who is your favorite music artist? Why?

Lescher: Music is also tough, but I'd have to say some old Creedence Clearwater Revival.

Q&A: What is your favorite movie? Why?

Lescher: Favorite movie would have to be ‘Old School.’ Will Ferrell gives me a good laugh.

Q&A: Do you play video games? If so, which one is your favorite?

Lescher: I do play video games and I would have to say it's a toss-up between NHL and FIFA for my favorite.

Q&A: What is your favorite hobby outside of baseball?

Lescher: Outside of baseball, my favorite hobby is probably playing Wiffle Ball with my buds, or swimming.

Q&A: What location is the farthest you have traveled from the Washington, D.C. metro area?

Lescher: The farthest away from D.C. I have been was probably Los Angeles when I was younger.

Q&A: Are you a pro sports fan? If so, who are your favorite teams?

Lescher: I'm a huge Nationals fan, and I also follow the Redskins and the Caps, as well.