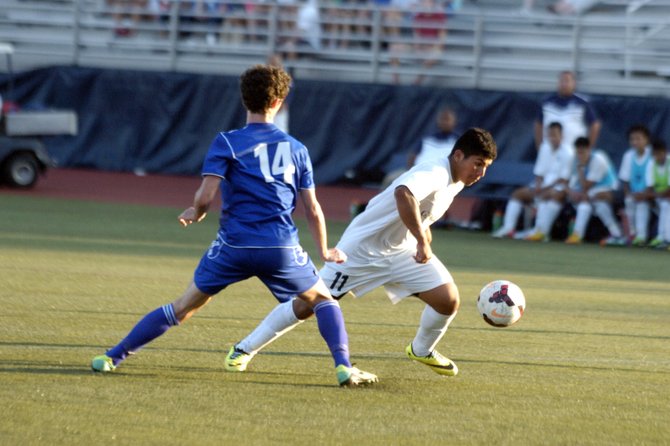 Washington-Lee sophomore Maycol Nunez was up to his usual goal-scoring ways in the first half of Tuesday’s 6A North region semifinal match against West Potomac, putting two in the back of the net for an early 2-0 lead.

West Potomac wouldn’t go quietly, however, and after a goal by midfielder Nelson Flores cut the Wolverines’ deficit in half, Daniel Damiani netted the equalizer on a 50-yard free kick in the closing seconds of the first half.

Nunez scored his third goal of the match in the second half, netting the game-winner in the 62nd minute as the Washington-Lee boys’ soccer team defeated West Potomac 4-2 in Arlington. Nunez’s hat trick propelled the Generals to Thursday’s region final against T.C. Williams at 5 p.m. in Alexandria. W-L, which also secured a berth in the state tournament, will attempt to win its first region championship since 1972.

“In the second half,” Nunez said, “Coach Jimmy [Carrasquillo], he told the team we had this, we’ve got to have a better second half and we came out strong.”

“The kid was on him, pulling him, tugging him, everything --- I think [Nunez’s jersey is] an extra-large now,” Carrasquillo said. “… To his credit, he was able to work through it, he was able to not get frustrated, not get out of his game and stay with it.”

Nunez scored his first goal of the evening in the 21st minute, and added a second in the 24th, but West Potomac continued to battle. Wolverines forward Bright Somuah hit the near post with a shot, but Flores was there to finish, cutting the W-L lead to 2-1 in the 30th minute. In the closing seconds of the first half, Damiani launched a free kick goal-ward from 50 yards out, and the ball sailed over the head of W-L goalkeeper Julian Esquer-Perez and into the net.

West Potomac finished the season with an 8-5-2 record. After losing to South County in the Conference 7 semifinals, the Wolverines defeated Osbourn Park 2-0 in the opening round of the region tournament on May 28, and upset Conference 5 champion Oakton 2-1 in the quarterfinals on May 30.

“We didn’t do well in the conference semifinals at all, and they picked it up and just started playing,” Peck said. “… We played three of the best teams in Northern Virginia [during the region tournament] and knocked two of the three out. We gave these guys a run for their money, it just came to the very end and they put the ball in the back of the net and we couldn’t. We had some chances, but they pulled it out, made it happen.”

W-L improved its record to 17-0-3. The Generals will face T.C. Williams on Thursday in a rematch of both teams’ regular-season finale. W-L defeated TC 4-0 on May 13.