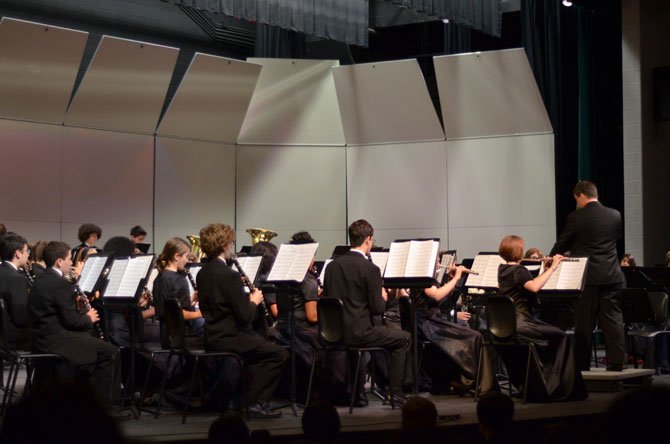 The South Lakes symphonic band preformed their Spring Concert on May 29. Photo by Ryan Dunn.

On May 29, the South Lakes High School symphonic band and wind ensemble performed at the school’s Little Theater. The show was conducted by Director of Bands Grayson Fore and was free and open to the public. “We played some of my favorite orchestral pieces,” said South Lakes junior Alex Arshadi. “I think it is a great way to end our year.” Arshadi was one of three South Lakes HS (SLHS) band members who earned Virginia All State Band/Orchestra honors this year. 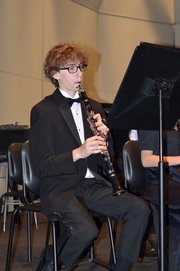 South Lakes student Samuel Wirth, a member of the school symphonic band played the clarinet at the Spring Concert.

South Lakes band members Joel Ladwig and Dylan Reiser also earned All Virginia Honors based on competitive audition at the 2014 All Virginia Band & Orchestra Event held on the campus of Virginia Tech on April 3-5. In addition, 14 students from SLHS earned All District Band Honors for Virginia Band & Orchestra Directors Association (VBODA) District 12. The music program for the May Spring Concert for the symphonic band included Photo Finish by Brant Karrick and La Roxelane by Franz Haydn. Pieces played by the wind ensemble included Mars by Gustav Holst and Candide Overture by Leonard Bernstein.

“The South Lakes High School Band has concluded another successful year,” said Music Director Fore. “The efforts of the students, parents and community have enabled the band to post superior performances that have resulted in South Lakes Band earning Virginia Honor Band award and the efforts of the entire music department have resulted in South Lakes being named a Blue Ribbon School for music education. The foundation for our success has been provided by the hard work of our students, feeder schools and the International Baccalaureate music program.”

Fore has been director of bands at South Lakes since August 1999 and admired the band students’ commitment despite the long winter and school breaks due to weather conditions. “We could have offered excuses, but instead posted results and musical performances,” stated Fore.

“This is one of my favorite shows because it honors the seniors,” said Melissa Gifford, president of the school’s Band Boosters organization. The Band Boosters are a tax-exempt organization dedicated to supporting the band program at South Lakes. Fairfax County does not fund many band expenses so the Booster Association conducts fundraising to meet the needs of the program. The Boosters also provide volunteer support ranging from uniform maintenance, providing refreshments and logistical support moving the band. The Band Boosters help decide how fundraising will be done, and have input into how the money will be spent. “We had terrific volunteer support this year, every contribution helps,” said Gifford. 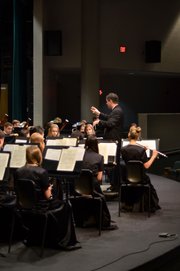 When the Symphonic Band left the stage, the Annual Band Booster Meeting was held. A motion was made and passed on the 2014 to 2015 proposed budget, and then officer nominees for the Booster were announced. These were also passed, with Melissa Gifford keeping position of president. At the conclusion of the meeting the Wind Ensemble began their performance. “I am very excited about this show,” said Roberta L. Gosling, a mother of two children who attend South Lakes. “I am proud of the kids for the effort that they have put on throughout the year.” During the Wind Ensemble show, senior Anna Gosling had a solo on the euphonium. Gosling is intending to begin studies at the College of William and Mary.

In other news the orchestra of South Lakes teacher and director of the IB music program Bryan Baldwin has been selected to perform at the Virginia Music Educators conference in November. Only the top two orchestras in the state are selected to perform. The SLHS choir was invited to perform in 2011 and the band was invited in 2012. It is rare for the three main music disciplines to be invited to perform, especially in such a short amount of time. On June 9 a Bands Awards Banquet will be held at South Lakes High School cafeteria. The band will perform again on Wednesday, June 18, at the South Lakes graduation at George Mason University for the senior graduation ceremony. For more information on the South Lakes band visit southlakesband.org.