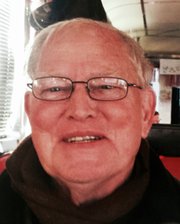 Potomac — Harold James Straker, 68, known for over a half century in the Potomac area for his expertise with horses, died June 2, at Veteran’s Hospital, Martinsburg, W.Va. He had cancer of the lung. His longtime friend, Helen “Lou Lou” Bowling Steinfort was with him.

Born in 1946, Harold moved with his parents, the late Harold and Julia Bayne Straker, to a Potomac farm near Pennyfield Lock on the C&O Canal. It was here, in his early childhood, where he fell in love with horses, grooming those on the farm, eventually getting his own and teaching himself how to ride.

Straker, a graduate of Potomac Elementary School and Richard Montgomery High School, joined the U.S. Army in 1966 and served in Viet Nam. Following a two-year stint in the Army he returned to Potomac and continued his interest working with horses. “He was the farm and broodmare manager for the late Carey and Herbert ‘Jack’ Miller’s Trespasser’s W farm on River Road, across from the Potomac Elementary School. He also became a professional whipper-in for Orange County Hunt in Middleburg, Va.,” said Lisa Gordon Carr, a close friend. “His interest continued in thoroughbred racing when he later helped Dr. Francie Luther with her breeding program and racing venues,” Carr continued.

Whenever the name Harold Straker is mentioned, those who knew him throughout the years would not just recall his love of horses, but of people for whom he cared, and there were many. When the late Dr. John Keeler, a Potomac veterinarian for decades, became ill it was Straker who stepped in and cared for him.

After Carey and Jack Miller’s move to Boyds, where they continued their thoroughbred racing program, the Millers, in later years, once again called on Harold to come and help. He first looked after Jack, (who in 2001 was named “The Perfect Lawyer” by Washingtonian Magazine,) and then Carey when she became ill. Straker took care of her until her death in 2011. “There was no more a devoted friend than Harold,” the Miller’s son William “Bo” Miller said, from his home in Nacogdoches, Texas.

Potomac Hunt member, Sara Lee Greenhalgh, of Poolesville, and former Potomac resident for many years, recalled once asking Straker, “How do you do so many good things for so many?” She recalled his exact answer, “My father always said to me, ‘Be nice to people. It doesn’t cost a dime and it makes you feel better, too.’” She concluded, “He seemed to live by that.”

A friend of more than 50 years, “Lou Lou” Bowling Steinfort echoed sentiments of others when she said, “He was the best friend anyone could have. He was a gift to everyone who knew him.”

Following retirement from the Millers, Straker never ceased his desire to help others. He continued with volunteerism, helping at the Frederick Soup Kitchen sponsored by Emanuel Trinity Lutheran Church. He was “an all-‘round good guy,” his long-time friend, Jack DeFriece said. The two knew each other since days at Potomac Elementary School. “He would do anything for you and what he said was what he meant,” he added.

A memorial gathering will be held on June 14, 5 p.m., at the Frederick home of Lisa and David Carr. In lieu of flowers donations may be sent to Emanuel Trinity Lutheran Church, 4004 Ballenger Creek Pike, Frederick, MD 21703.