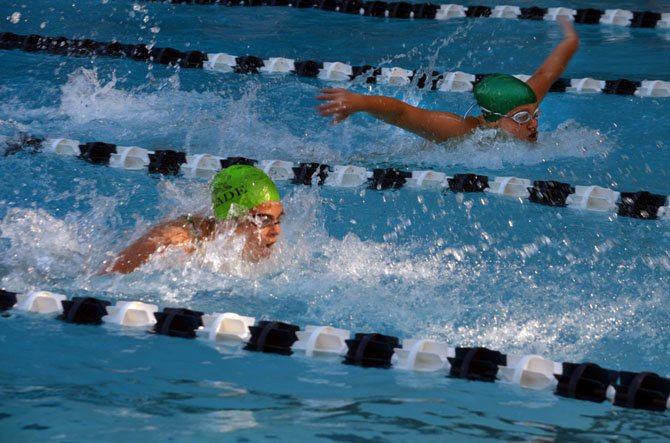 Emily Landeryou and Madeline LaPorte race to a one-two finish for Glade in the girls’ 50-meter butterfly event. Photo contributed

The boys’ 50-meter butterfly event gets off to a good start, with (from left) David Clark swimming for Glade and Robby Cordts, Conor McBride, and John Hughes swimming for Lake Audubon.

With thunderstorms affecting several practices in the two weeks leading up to the Reston Swim Team Association’s opening weekend, many wondered if the season was off to a rough start. But opening day dawned bright and cloudless and the swimmers got off to a blazing start with several swimmers setting new times for team and league records.

Newbridge swimmer Ryan Ha also set a new team record in 13–14 50 backstroke with a time of 30.74, beating his own record set during the All-Star meet last summer.

Suya Haering of Lake Audubon and Kaitlin Mahon of Glade show their good sportsmanship after competing in the girls’ 8 and under 25-meter backstroke.