Third in the World
Votes

Third in the World

Nysmith’s Odyssey of the Mind places third in the World Finals. 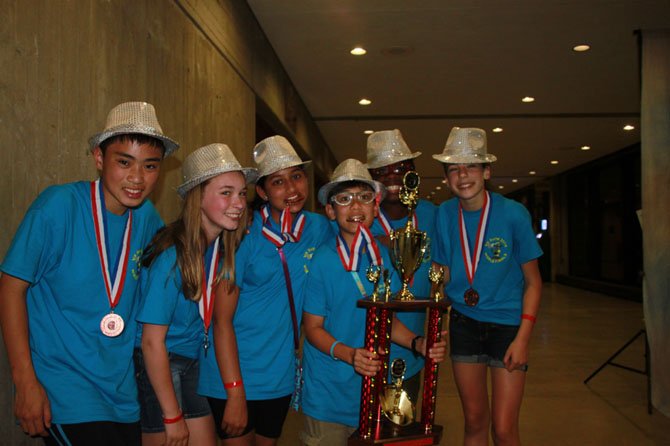 On their third consecutive trip to the World Finals, Nysmith’s Oddysey of the Mind Team came in third out of 836 teams at the competition held at Iowa State University. Nysmith’s Odyssey of the Mind Team is school sponsored and run by parents of participating students. Coach Marwan Nabulsi is the father of one of the student competitors and has been involved with the program for three years. Nabulsi says that the program allows him to work with his daughter and her friends in competitions that “allow students to learn to collaborate with each other and think outside of the box to solve problems.”

The Nysmith team, of six seventh graders, placed third in the world after finishing first at Regionals in March and tying for second at States in April. Students Ilina Gobburu, Maxwell Jones, Bryce Nabulsi, Chris Nguyen, Landon Poon, and Anika Schipma spent over six months preparing for the long-term problem that they were tasked to solve, titled “The Not So Haunted House.” For this problem they had a $145 budget and needed to find a creative way to use garbage and household items to create their solution and presentation. The team used the Louvre as a backdrop, solving the mystery of who stole the Pink Panther diamond from the gem exhibit and utilized their artistic and engineering skills for an impressive performance including a homemade hologram.

The second component of the competition was a spontaneous hands-on problem solving challenge where the students were presented with an unseen problem and given just a few minutes to solve it. Not only did the Nysmith team finish first place in this category overall but had two minutes to spare, using their extra time to entertain the judges with their musical talents by singing “Cups” from the movie Pitch Perfect.

Parent Jackie Becker believes that Odyssey of the Mind is very beneficial to student participants. “Whether they win or lose, these competitions are an amazing experience for all students their age. Each of the kids on this team possesses diverse talents, ranging from math and engineering to music as well as communication skills, creativity, and writing. They have to work together to come up with solutions to complex problems and it is great that, especially at competitions like the World Finals, they are able to interact with kids from around to world to see how others tackle the same problems in different ways.”

Anika, one of the competitors, says that she has gained many valuable things from participating in Odyssey of the Mind. “I have learned about teamwork and working well with others. Since I went to the World Finals I have gotten to meet people from all around the world who have lots of things in common with me. I have also learned how months of hard work can pay off.”