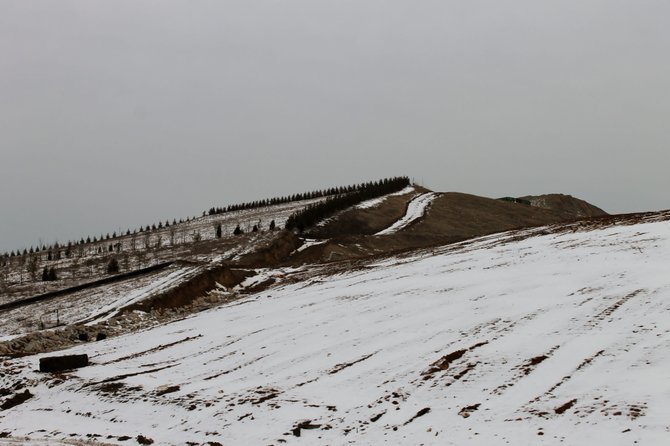 The decision on whether to approve an application extending the life of the Lorton construction debris landfill, pictured here, has once again been deferred, this time to July 29. Photo by Janelle Germanos.

The decision has already been delayed before, but the future of the Lorton landfill will remain uncertain as the Board of Supervisors voted Tuesday to defer the decision to July 29.

Last month, the decision was deferred to Tuesday after a seven-hour public hearing on the EnviroSolutions application, which originally sought to extend the life of the landfill until 2040. On June 16, EnviroSolutions announced it would reduce the landfill extension until 2032 and lower the height of the controversial berm from 70 feet to 52 feet.

“EnviroSolutions continues to respond to feedback on the Fairfax Green Energy Park proposal,” said Conrad Mehan, director of government relations for EnviroSolutions. “This proposal provides the County long-term disposal and recycling capacity for construction debris, reduces greenhouse gas emissions by more than 3M tons over the life of the project and fosters renewable energy jobs and technologies in Fairfax County.”

ON TUESDAY’S Board of Supervisors meeting, Chairman Sharon Bulova motioned to defer the application in order for EnviroSolutions and those opposed to the application to reach a compromise.

“The landfill is important in helping the County to achieve our efforts to revitalize and redevelop our aging commercial and industrial areas, such as Tysons, Merrifield, Springfield and the Richmond Highway areas by providing a disposal site in close proximity to these areas,” Bulova said at the meeting.

Bulova set a framework for compromise, which includes the reduction of the mechanically-stabilized earthen berm to a maximum height of 20 feet, or elimination of the berm, a date-certain closure of 2025, and the use of a mixed-waste recycling facility on Furnace road.

Bulova, along with planning commissioner Tim Sargeant and other community members, was part of a task force in March that also aimed to find a compromise.

“I have become concerned that the original application goes too far and would have too much of an impact on the surrounding community,” Bulova said.

Of concern, Bulova said, is the 70-foot berm that is being proposed to surround the entire landfill.

“I am told that our county staff has never approved a structure of that size and magnitude. They, and I, have concerns for the long term integrity and liability of this structure, especially once the landfill is closed and absent an operator to insure regular inspections and maintenance in perpetuity,” Bulova said.

The wind turbines were also contested among many citizens, mainly because of their potential harm to bald eagles at nearby Mason Neck State Park. EnviroSolutions announced on June 16 that instead of windmills, solar panels will be installed.

The applicant is aware of the framework and willing to work with it, said Frank McDermott, a lawyer representing EnviroSolutions.

MANY HOMEOWNERS ASSOCIATIONS, including those represented in the South County Federation, voiced their disapproval to the landfill at public hearings in February and May.

“In response to today’s deferral of SEA2 to be further amended by select members of the Board of Supervisors, the applicant, County Staff and representatives from the community, we would like to express our thanks to Chairman Bulova and the Board of Supervisors for recognizing that this application has too many liabilities and problems for both the County and the community to be acceptable,” Nick Firth, president of the South County Federation, stated in a press release.

Gerry Hyland (D-Mount Vernon) will also join the compromise group. Hyland expressed interest in looking back at the 2007 approved application, which would require a park to be built at the closed landfill.

“As we go through this process of trying to negotiate something, I hope that staff looks at that and can be creative as to how we can possibly recreate this land as a park,” Hyland said.