Gadson, Army Honored by Board of Supervisors
Votes

Gadson, Army Honored by Board of Supervisors

For his work in strengthening Fort Belvoir’s relationship with Fairfax County and for serving as a community leader, Colonel Gregory D. Gadson was honored with a proclamation from the Board of Supervisors as he departs Fort Belvoir on June 25.

“He’s been wonderful to work with, and I would especially like to recognize the partnership efforts that we’ve made between Fort Belvoir and the Army in finding things that we can do together. You have personally invested your own time and efforts into that process,” said Sharon Bulova, chairman of the Fairfax County Board of Supervisors. 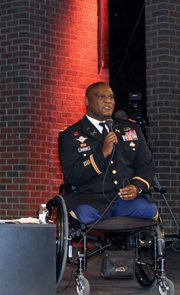 Colonel Gregory D. Gadson was recognized for his work in improving the relationship between Fort Belvoir and Fairfax County as he departs from his position on June 25.

The motion was requested by Supervisors Pat Herrity, Jeff McKay and Gerry Hyland, calling him an “outstanding leader and asset to the community,” and came during June 13-21, a week Fairfax County designated as Army Week.

Gadson has been garrison commander of Fort Belvoir since June 2012. He has served in active duty in every major conflict in the last 20 years, including Operation Desert Storm and Operation Iraqi Freedom, and has received three bronze stars and a Purple Heart.

Gadson was applauded by the board for working together with Fairfax County, including the widening of Route One, for which he was named the 2013 Mount Vernon-Lee Chamber of Commerce Citizen of the Year and the 2014 Lord Fairfax from the Mount Vernon District.

Herrity recognized Gadson’s “career full of accomplishments,” including his work for Fort Belvoir and veterans through the Wounded Warrior Project.

“You are an inspiration. Just when I thought our relationship with Fort Belvoir couldn’t get any stronger, you led an effort to see where we could work harder together, and it’s been a very successful effort. It’s been recognized by our community too,” Herrity said.

McKay thanked Gadson for his service and recognized his ability to work together with Fairfax County.

“From day one, when I met Colonel Gadson, he made it clear that the doors of Fort Belvoir were open to the community,” McKay said.

Donald Carr, director of public affairs at Fort Belvoir, was also recognized for his service by the Board of Supervisors.

McKay said of Carr that there hasn’t been a major effort at Fort Belvoir that Carr hasn’t been involved in, and Hyland called him a true friend of Fairfax County.

Gadson expressed his thanks and said he was humbled by the recognition. He was also thankful for Fairfax County declaring June 13-21 as Army Week.

“I have never heard of any kind of government going through this measure in recognizing the army,” he said.

Gadson called the partnership with Fairfax County a “vital relationship.”

“Our relationship with you has really been about a partnership. It is about a true relationship, it goes well beyond social niceties, but a deep concern for what we both have at stake, and that’s why I believe our partnership of what we’ve been able to accomplish has been profound and why we all have optimism as we go forward,” Gadson said.

Gadson said he is proud to settle in Fairfax County, something the board members were happy to hear.