Cancer at any age is devastating; but it’s particularly heartbreaking when it strikes a child. So St. Baldrick’s Day events try to raise as much money as possible toward finding a cure for childhood cancer.

In a cheerful, fun-filled atmosphere with music and laughter, participants will have their heads shaved bald while friends and families cheer them on. Fast Eddie’s will also offer mechanical-bull rides for $5, with half the proceeds going to St. Baldrick’s.

Steve Ratliff of Centreville’s Country Club Manor community organized the event with help from Pleasant Hill’s Meg Crossett, whose daughter Rachel died of neuroblastoma in 2001 at age 6. He’s also been shaving his hair and beard at this and other St. Baldrick’s affairs for 11 years now.

“I have healthy kids, but there are a lot who aren’t healthy,” said Ratliff. “No parent should every have to bury a child. So if sitting down and getting my head shaved once a year can help, even a little bit, I’m glad to do it. It’s only hair, and it’s fun — it’s a neat feeling to be a part of the event.”

The St. Baldrick’s Foundation began March 17, 2000, when three business executives decided to transform their St. Patrick’s Day party into a fund-raiser for children with cancer. With the help of 17 colleagues, they hoped to raise $17,000 on the 17th by having each person collect $1,000 to be shaved. That event yielded more than $104,000, and a tradition was born.

However, the need is still great. More children die of cancer in the U.S. than from any other disease and, globally, a child is diagnosed every 3 minutes. Many adult cancers can be diagnosed early; but in 80 percent of children, it’s already spread to other areas of the body by the time it’s diagnosed.

And there’s still time to join in. The link to the event page is: www.stbaldricks.org/events/mypage/149/2014.

“The hope is that, one of these days, we won’t have to do this because they’ll have found a cure,” said Ratliff. “You never know when that next dollar or next event will be the one that makes the difference.”

Westfield High freshman William Dzubak is one of the shavees, and it’ll be his sixth time. He plans to raise $1,000 and is halfway there.

“It feels really good to help children, and I’ve had loved ones in my life who’ve been diagnosed with cancer,” he said. “The people involved with the event are all really nice, and it’s good to know there are so many people around you who have a love for curing cancer.”

Jack Elliott, a 2013 Westfield grad now at NOVA, participated two years ago and will be in this year’s event, as well. “Usually, I do it for my best friend Taylor, who has neuroblastoma,” he said. “But this year, I’m doing it for my grandmother who was just diagnosed with leukemia.”

His favorite part of St. Baldrick’s Day is telling people about why he’s bald. “When they ask about my shaved head, I tell them not to pity people with cancer, but to treat them like regular people,” said Elliott. “I also like telling other people to get involved; I just got five or six college kids to sign up, too. I raised $900 last time, in a week, so I’m aiming for $2,000 this time.”

J.T. Weiland II, of Centreville’s Stonehenge community, has raised money for several years for the Muscular Dystrophy Association, but he’s participating in St. Baldrick’s for the first time. To raise funds, he tells people they’ll see a funny, bald photo of him on Facebook after the event. He figures “it’ll entice people to donate more if I show my commitment to the cause.”

His target is $5,000 and, said Weiland, “It’s a steep goal, but I’m hoping to make it. I like raising money for charity, especially for children. A friend of mine’s daughter had cancer; so anything I can do to help any child, I will.”

Also participating are husband and wife Wayne Malick and Lisa Lanser of Country Club Manor. It’ll be Malick’s second time shaving, and he said the event’s “neat because any research is good research, so I’m trying to help as much as I can.” He’s also looking forward to “seeing everybody together when we get shaved.”

So far, Lanser is the only woman who’s signed up to be shaved. “My husband did it two years ago, and I wanted to do it, too,” she said. “It’s a replenishable resource, so why not? And at least, I have a choice — a lot of people fighting cancer don’t get that choice.”

She also wanted to help because childhood cancer is “so rampant.” She’ll also do it in memory of two women in her high-school graduating class — one in her 30s and one in her 40s — who both died of cancer. She hopes to raise $1,000 and, so far, is at $475.

Lanser’s never had her head shaved before, but she’s approaching it with a good attitude. “It’ll be a whole, new experience,” she said. “I wasn’t even born bald.” 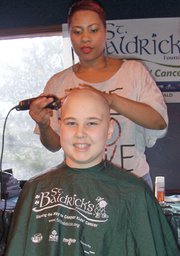 William Dzubak, then in middle school, gets shaved by Lakisha Shelton of CC Hair Salon. 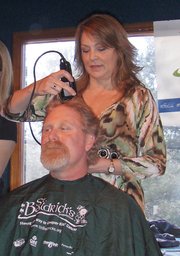 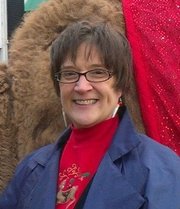 Lisa Lanser will get her head shaved.