His Name Is ‘Fronkensteen’
Votes

A rollicking, Mel Brooks comedy will burst upon the stage when The Alliance Theatre presents “Young Frankenstein.” A musical version of the 1974 film, it takes direct dialogue from it and adds some 15 musical numbers.

“It’s hysterical and we have an absolutely amazing cast,” said Director Leslie Anne Ross. “They bring an incredible amount of experience and energy. This show takes all the classic gags from the film and puts them on the stage with singing and dancing.”

Freddie Frankenstein is a New York scientist and medical-school teacher. His grandfather Victor dies and Frankenstein inherits his estate in Transylvania. He goes there to deal with it and discovers his grandfather’s medical books. He then decides to create a monster, and hilarity ensues.

The cast and crew of 35 have been rehearsing since early January. “The creative team from our production of ‘The 25th Annual Putnam County Spelling Bee’ worked so well together that we have them again for this show,” said Ross. “And that says a lot about Alliance that good people keep wanting to come back.”

The actors are a mix of those new to the company, plus seasoned veterans. Ross is also the set designer, and Producer Maggie Swan is the lead costume designer. The scenes take place in New York, Transylvania, a Bavarian town, a laboratory and a castle. The actors wear 1930s clothing, including dirndl dresses and lederhosen.

Portraying Frankenstein, the dean of anatomy at a world-renowned medical school, is Ian Wade. “He doesn’t want to admit he’s his grandfather’s descendant, so he pronounces his name ‘Fronkensteen,’” said Wade. “He’s an incredibly brilliant surgeon and anatomy teacher who loves the brain more than anything else. In Transylvania, he meets Igor, who wants to work with him like their grandparents did and build a monster, but he resists.”

Frankenstein has a fiancé, Elizabeth, in New York. But, said Wade, “She’s cold and standoffish, and he’s shy about physical love. However, he’s egotistical and self-assured when it comes to science. I can do a lot with this role because he’s energetic and passionate and I can express that. I also like his comical overestimation of himself; he’s funny without meaning to be.”

Wade’s favorite number is “Puttin’ on the Ritz,” which he sings. “It’s an Irving Berlin song with a catchy melody, and I like how the music flows,” he said. “It’s me and the monster dancing together onstage, and it’s very funny.”

He says the audience will enjoy the show’s music and dancing. “It’s well-choreographed and mirrors the movie, which was very popular,” he said. “It’s a funny show and it’ll be fun to do.”

Scott Olson, who’s directed Alliance shows, plays the monster. “He’s basically a child who has great strength and is very big,” said Olson. “For example, he’s afraid of fire and feels emotions greatly. I wear boots with 4-inch soles that make me 6-foot-6-inches tall and a padded suit so I’ll look heavier. I’m having a blast because I just have to act like a dork. I groan and scream a lot and do very physical comedy.”

He said the audience will like the way the story progresses with the comedy. “There are a lot of morals woven through the show, and it’s a whole, different ending than what they’d expect,” said Olson. “It’s also about how the monster accepts himself as human and learns about the world around him.

Enjoying her part, Ermlick said, “Inga’s a smiley and positive character — and I get to have a German accent. She’s a song-and-dance girl, so I get to do fun, upbeat numbers and even yodel. Inga has a lot of different facets to her, and I like finding her different layers. She’s also got lots of really great lines.” An added bonus is that Ermlick’s real-life husband, Dave, plays Victor, in their first show together.

“It’s a feel-good musical with lots of catchy tunes, and Mel Brooks is hilarious,” said Ermlick. “It’s rare that someone can translate a film to the stage and have it not lose its integrity and be equally as strong, so it’s extremely well-written. And it’s really well-cast, from the leads to the ensemble.”

One of those ensemble members is Little Rocky Run’s Kathy Young. She sings and dances, plays a villager and also portrays the wife of Inspector Kemp (Little Rocky Run’s John Totten), the police officer trying to find the monster. “It’s a lot of fun, the music is fabulous and the actors are wonderful and so talented,” she said.

She especially likes the number, “Please Don’t Touch Me,” sung by Cara Giambrone as Elizabeth. “She has a great voice and it’s a hysterical song,” said Young. Overall, she said, “The audience will like the story and the funny quips and jokes. They’ll also love the relationship between Igor and Freddie. The audience will see how much fun everyone’s having and will have a good time, too.” 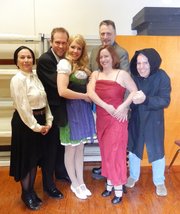 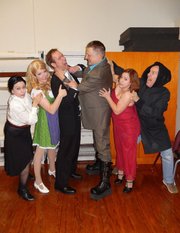