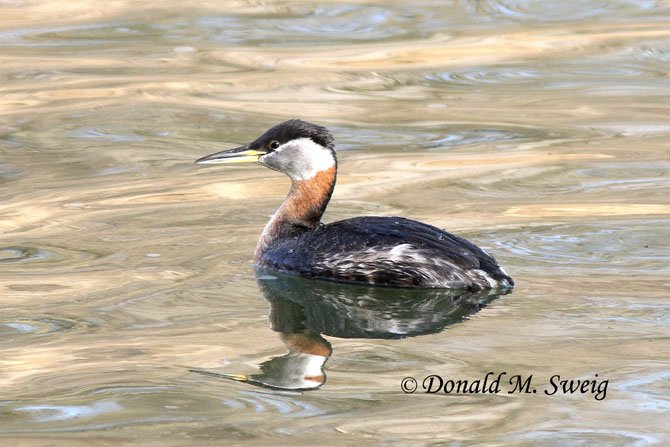 A Red-necked Grebe, remarkable in breeding plumage, photographed in the Potomac River at Riley’s Lock on Saturday, March 8. Donald Sweig

A Red-necked Grebe, one of at least 19 in view of Riley’s Lock Saturday, March 8, wrestles to swallow a fish.

The 2014 “Winter of our Discontent,” has been difficult for North American waterfowl as well. Ducks, geese, swans, and grebes gather in large groups/flocks on lakes, rivers, ponds, and such to pass the winter before the spring breeding season.

This year, many of those northern bodies of water are frozen (over 90-percent frozen in the Great Lakes), and so thousands of displaced waterfowl have come south to Maryland and other places where there is still open water. The confluence of Seneca Creek into the Potomac River in Montgomery County has attracted large numbers of these wintering birds, many more than usual.

Avian enthusiasts (birders/birdwatchers) have gathered often at Riley’s Lock (mile 22.7 on the C&O Canal) recently to observe the unexpected bounty.

Of special interest has been the unusually large number of Red-necked Grebes. In many years one could see one or two grebes there. This year there are many more. Last Saturday, 19 Red-necked Grebes were counted at one time at Seneca, with two or three further up the creek, and 10 or more seen over along the Virginia shore. There have been other recent reports of 20 or more Red-necked Grebes at the mouth of Seneca Creek. A true bounty.

An added treat, is that some of the birds have molted from dull winter plumage into their striking, colorful, spring breeding plumage. Frequently diving to feed, a grebe will often come back up with a fish, which then occasions squabbling amongst them for the prize. Further out in the Potomac, one can sometimes find large numbers of many species of ducks and swans as well. It’s been a busy winter at Seneca.

But spring is coming and the birds will soon leave for their northern breeding areas. For a little while more, however, one can still go see them before they depart. Take your binoculars, if you have some. It’s a rare opportunity.