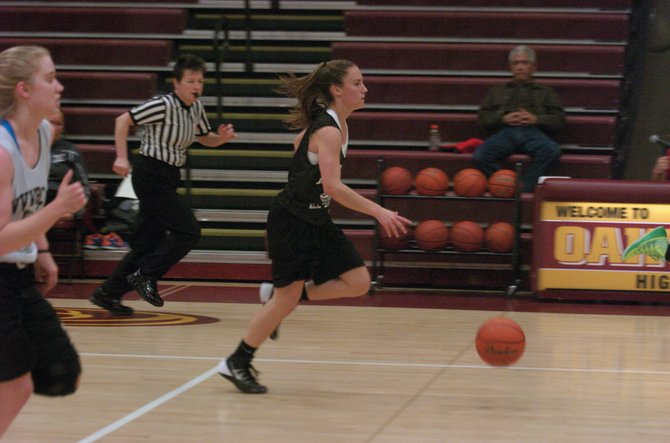 Centreville senior Jenna Green was named MVP of the West all-stars during the 10th Suburban Classic on March 23 at Oakton High School. Photo by Craig Sterbutzel.

As a junior, Green led the Wildcats to their first district title since 1993, beating the Cougars 44-41 in the district tournament championship game after splitting the two regular-season meetings. This year, Oakton beat Centreville 48-47 in overtime of the conference final after splitting the regular-season meetings. After Centreville beat Oakton on Jan. 17, Wildcats head coach Tom Watson said games against Oakton “mean everything.”

On Sunday, Green took part in her final high school basketball event: the 10th Suburban Classic all-star game at Oakton High School. While her West all-stars fell short, Green was named team MVP. After the game, Green received her award at midcourt and posed for pictures with none other than Fred Priester, head coach of the rival Oakton Cougars and president of the Northern Virginia Women’s Basketball Coaches Association.

“I feel honored to have been named MVP because I was playing with so many talented players,” Green wrote in an email. “It was my final accomplishment of my high school career. I really admire Coach Priester. I think he is a very good coach and I am definitely going to miss the Centreville and Oakton rivalry.”

Green, who will play for the College of William & Mary next season, finished with 13 points but her West all-stars lost to the East 78-64. The East all-stars, coached by Edison’s Dianne Lewis, led the West squad, coached by Madison’s Kirsten Stone, by as many as 22 points in the second half. Katie Blumer, Green’s teammate at Centreville, was also on the West roster but didn’t play due to injury.

"I really admire Coach Priester. I think he is a very good coach and I am definitely going to miss the Centreville and Oakton rivalry.”

The Suburban Classic featured some of the top seniors from the 6A North and 5A North regions. The NVWBCA sponsored the event and helped raised scholarship money for athletes.

T.C. Williams teammates Tykera Carter and Angie Schedler played for the East all-stars, finishing with nine and three points, respectively. Carter buried a 3-pointer and scored on a putback in the fourth quarter, giving the East a 68-49 lead.

Carter and Schedler are undecided about their respective college plans.

“It was great,” Schedler said about getting to play one more game with Carter. “I’m going to miss playing with her, a lot.”

McLean senior Cami Prock finished with 12 points for the East and earned team MVP honors. Prock “took a couple emotional days off” following McLean’s season-ending loss to T.C. Williams in the opening round of the 6A North regional tournament on Feb. 24. Following her decompression session, Prock returned to the gym to work on her game. While her time with the McLean girls’ basketball team was over, Prock’s hard work paid off a month down the road with a strong performance in the Suburban Classic.

The East all-stars led 34-30 late in the second quarter. Prock helped the East pull away, though, scoring six points in the final 90 seconds of the first half as the team built a 41-30 halftime advantage.

Prock agreed that the environment was a combination of competitiveness and enjoyment.

“It was definitely a great mixture of both,” she said. “I know when I’m competing and having fun at the same time, it’s a great feeling.”

Prock will attend the College of William & Mary next year and is debating whether to attempt to join the university’s basketball team as a walk on.

South Lakes guard Caitlin Jensen, a member of the West all-stars, was another athlete who didn’t take long to return to the gym after her high school season had ended. Jensen said she went back to work the following day after the Seahawks lost to Centreville in the regional quarterfinals on Feb. 25.

On Sunday, Jensen led all scorers with 22 points, including four 3-pointers.

Jensen will continue her basketball career next season at the University of Mary Washington. On this afternoon, she got to play once again with South Lakes teammate Abby Rendle, and with girls she had competed against during her high school career.

“It was a good experience,” Jensen said. “It was nice because I’ve played against these people forever and now playing on the same team with [Centreville point guard] Jenna [Green] and all them, it’s a new feel, but I liked it.”

Madison senior Katie Kerrigan has also been working hard, but in a different sport. After the Madison girls' basketball team lost to Stonewall Jackson in the region semifinals on Feb. 27, Kerrigan transitioned to her primary sport of lacrosse, which she will play at Ohio State University. On Sunday, she was back on the hardwood as a member of the West all-stars.

“It was fun,” Stone said of coaching Kerrigan in the all-star game. “She’s just a workhorse. You don’t really see many of those. … I turned to the girls on the bench and I’m like, ‘I would hate for her to have to guard me.’ And they were like, ‘it’s awful.’”

Lewis, who coached Edison to its second consecutive region championship this season, said allowing players to have fun was a priority, but she takes pride in winning.

Sunday’s Suburban Classic started with a 3-point shootout — the perfect competition for West Springfield’s Berglund to show off her sharpshooting skills.

After posting the top score of the first round (19), Berglund won the event with a score of 9 in the finals, beating McLean’s Prock, Centreville’s Green and Osbourn’s Dufrene.

Berglund, who scored more than 1,000 points in her high school career, knocked down countless 3-pointers in her four years as a Spartan, but she said performing in front of a small crowd in a quiet Oakton High School gym was more nerve-wracking than playing in a big game.

“My heart was racing, I don’t know why,” Berglund said. “I was pretty nervous. It was fun. I felt like I was in the NBA all-star [shootout]. My legs got tired in the second round, that’s why my score dropped so much, but it was fun.”