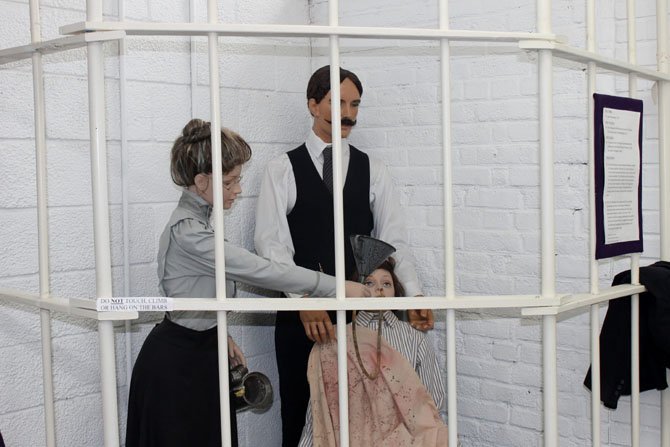 The Workhouse Prison Museum in Lorton, located on the campus of the Workhouse Arts Center, provides a glimpse into the bravery of the suffragists who were imprisoned there in 1917. In the exhibit pictured above, a suffragist is force-fed by prison guards. Photo by Janelle Germanos.

March may be designated as Women’s History Month, but the Workhouse Prison Museum, located in Lorton, is open all year long to those who wish to learn more about women’s fight for the right to vote for more than just one month.

Situated in building nine within the Workhouse Arts Center, the museum includes a “Struggle at the Workhouse” exhibit that details the women’s suffrage movement and tells the stories of the women imprisoned at the Occoquan Workhouse in 1917.

The Workhouse Arts Center is located at the site of the former D.C. prison, previously known as the Occoquan Workhouse.

The “Struggle at the Workhouse” exhibit at the Workhouse Arts Center in Lorton tells the story of the women who were imprisoned at the prison there in 1917. The suffragists were arrested for picketing at the sidewalk in front of the White House for the right to vote.

According to Emily McCoy, chair of the Turning Point Suffragist Memorial Association, suffragists began picketing at the White House to get the attention of President Woodrow Wilson.

“They demanded their right to vote in silent demonstrations with signs that used President Wilson’s very own words to demand the right to vote,” McCoy said.

In 1917, the women had been holding non-violent protests for about six months without incident, until McCoy said it became an embarrassment to the Wilson administration to have the women protesting in front of the White House, using his own words against him.

THE SUFFRAGISTS were arrested for “obstructing sidewalk traffic” and many of them were sent to the Occoquan Workhouse. In fact, visitors can view the prison log at the exhibit, which lists the women and the charges they were given.

After they were arrested, many suffragists at the Occoquan Workhouse went on a hunger strike to protest their incarceration. Several were force-fed, including Lucy Burns, the founder of the National Women’s Party.

Visitors to the museum can view a life-size display of a suffragist being force-fed. The exhibit, curated by Judy Kelly, also includes photographs, audio reenactments, and displays that shed light on the conditions faced by the suffragists who were imprisoned here.

According to museum volunteer Kenena Spalding, the women were force-fed a mixture of milk and raw eggs. The youngest suffragist imprisoned was 19, and the oldest was 73.

“Lucy [Burns] struggled when they force-fed her. She closed her mouth so tightly, they needed five men to hold her down,” Spalding said.

McCoy said the women were too strong and committed to their cause to give up because of the terrible conditions at the prison.

“The incarceration was meant to send a message,” McCoy said. “It was clearly to break their spirit, but it backfired.”

The Turning Point Suffragist Memorial Association is currently working on building a memorial at Occoquan Regional Park to honor the suffragists who secured the right to vote for women.

THOSE INTERESTED in learning more about the women imprisoned at the Occoquan Workhouse can visit the museum at the Workhouse Arts Center. The hours are 12-3 p.m. Wednesday through Friday, and 12-4 p.m. Saturday and Sunday.