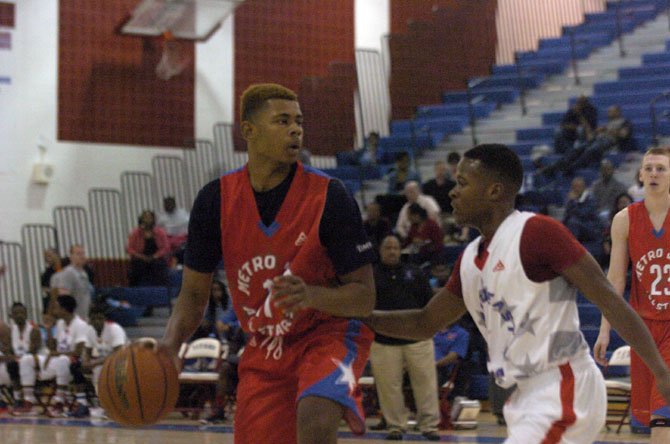 Herndon senior Brandon Alston, left, scored a game-high 25 points for the West all-stars and was named MVP of the East-West all-star game during the 41st Annual Capital Classic on April 26 at T.C. Williams High School. Photo by Craig Sterbutzel.

Herndon senior Kent Auslander scored 11 points, including a trio of 3-pointers, for the West during the Capital Classic’s East-West all-star game on April 26 at T.C. Williams High School.

Brandon Alston experienced a lot during his senior year of high school.

He transferred from St. Benedict’s in Newark, N.J., to Herndon High, returning to the community in which he grew up. After joining the school’s boys’ basketball team, the Hornets experienced the joy of a Conference 5 championship and the pain of a season-ending overtime loss to Woodson in the region semifinals. Alston also decided to continue his basketball career at Lehigh University.

Alston, a 6-foot-5 guard, scored a game-high 25 points for the West all-stars, leading the team to a 126-115 victory in the East-West all-star game during the 41st Annual Capital Classic at T.C. Williams High School.

Alston shot 6-for-14 from the floor, including 3-for-4 from 3-point range, and made 10 of 11 free-throw attempts. He grabbed six rebounds and tallied five assists en route to MVP honors.

It was an impressive showing for Alston as he prepares to play Division I basketball at Lehigh.

Alston was part of a West team, led by W.T. Woodson head coach Doug Craig, which shared the ball well, scored 46 points in the first quarter and led 78-53 at halftime.

“Our coach is a good coach,” Alston said. “We actually had two practices, so it wasn’t really the first time we played together. We knew we had a lot of shooters, so we just got it to the open man.”

Kent Auslander, Alston’s teammate at Herndon, also suited up for the West squad. Auslander was in the starting lineup and finished with 11 points. He made 4 of 7 field-goal attempts, including 3 of 6 from behind the arc. He grabbed six rebounds and finished with three assists.

Eight of the nine West players scored in double figures.

Earlier in the North all-stars defeated the South all-stars 109-106. Oakton senior Robert Bacon started for the South team and finished with six points and five rebounds.