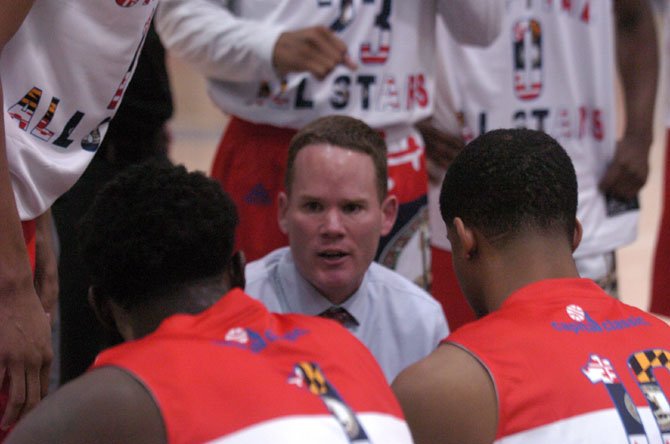 Chris Lun sat on the bench and watched as Randy Haynes took flight.

Haynes, a senior from Potomac High School in Dumfries, Va., and a member of the Capital all-star team, caught an alley-oop pass off the backboard and threw down an electrifying dunk. Haynes' display of athleticism led to a reactionary twitch from Lun, as if in that moment, the coach had turned into one his teenage athletes caught up in a moment of amazement.

“It’s fun seeing this stuff up close,” Lun said. “I love my Whitman guys to death. They play so well like a team, but we don’t get the alley-oop dunks off the backboard at Whitman, so it’s fun to see that up close.”

Lun, head coach of the Whitman boys’ basketball program, led the Vikings to the 4A state championship game in March. On April 26, Lun coached the Capital all-stars, a team composed of athletes from the Washington, D.C.-metro area, during the main event of the 41st Annual Capital Classic at T.C. Williams High School in Alexandria, Va. Facing a U.S. all-stars team composed primarily of athletes from up and down the East Coast, Lun’s Capital squad held a nine-point lead entering the fourth quarter before falling to the U.S. team 139-134.

“It’s fun seeing this stuff up close. I love my Whitman guys to death. They play so well like a team, but we don’t get the alley-oop dunks off the backboard at Whitman, so it’s fun to see that up close.”

While the Capital all-stars came up short, Lun said he enjoyed coaching in the event. NBA stars such as LeBron James, Dwight Howard and Carmelo Anthony have participated in the Capital Classic, along with Hall of Famers Michael Jordan and Magic Johnson. 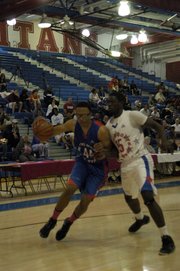 Bullis’ Andre Walker, left, had 12 points and six rebounds as a member of the North all-stars during the 41st Annual Capital Classic on April 26 at T.C. Williams High School.

“It was a great experience seeing the guys up close,” Lun said. “Just unbelievable talent on the court.”

Lun, 37, led Whitman to a 21-7 record this season. The Vikings advanced to the state championship game, where they ran into a talented Wise team, losing 70-43. Lun, a 1995 graduate of Seneca Valley High School in Germantown, has coached the Whitman boys’ program for a decade, compiling a 141-103 record. He led the Vikings to a state championship in 2006.

“It was a great year for us,” Lun said. “The run that our guys went on was just fantastic. I love my Whitman team. They deserve everything they got … this year. We’re going to miss our senior class and this is just a great way to cap it off.”