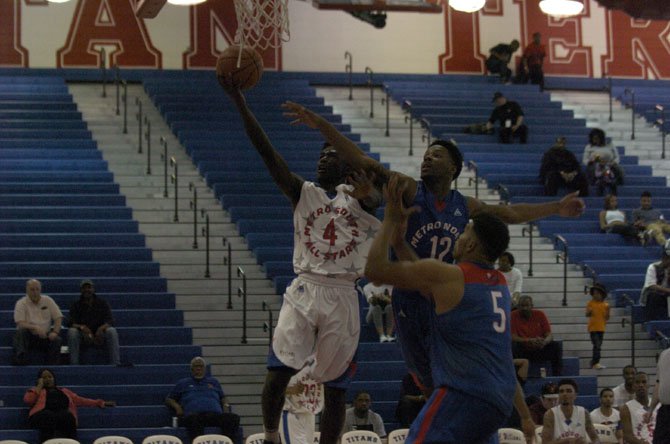 St. Stephen’s & St. Agnes senior Gavin Peppers takes it to the rim for the South all-stars during the 41st Annual Capital Classic on April 26 at T.C. Williams High School. Photo by Craig Sterbutzel.

The South all-stars trailed by more than 20 points in the opening game of the 41st Annual Capital Classic on April 26 at T.C. Williams High School, but that didn’t stop St. Stephen’s & St. Agnes’ Gavin Peppers and Cam Gregory from trying to get their team back in the game.

With the fourth quarter winding down, Peppers scored eight straight points to pull the South within four. In the final minute, Gregory knocked down a 3-pointer and threw down a putback dunk to cut the North all-stars’ lead to one. In the end, the South fell short, 109-106, but Peppers and Gregory had put forth a strong effort.

Playing in the first of three all-star games during the Capital Classic, Gregory finished with 18 points and 15 rebounds, while Peppers totaled 15 points, six assists and five rebounds.

“I just wanted to make the game close,” Peppers said. “I wasn’t playing good for most of the game, so I wanted to come out and pretty much prove to everybody why I was selected to play in one of these games. I wanted to make a statement.”

Peppers and Gregory were once teammates at Bishop O’Connell High School before ending their prep careers together at St. Stephen’s & St. Agnes. Peppers is committed to Southeast Missouri State, while Gregory is headed to Loyola.

“I just wanted to make the game close. I wasn’t playing good for most of the game, so I wanted to come out and pretty much prove to everybody why I was selected to play in one of these games. I wanted to make a statement.”

Wakefield’s Tony Bentley coached the South all-stars and praised his team for continuing to fight after falling behind. 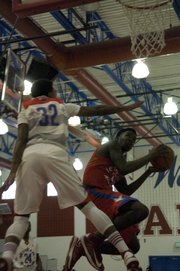 “I kept telling them: ‘You guys see all-star games, come on, let’s be different. Do something different,’” Bentley said. “They dug in down to the end and I was very happy to see they didn’t want to go out like that. When the final horn went off you heard, ‘Ah, [dang,]’ because they wanted to win. Most kids want to just go through the motions in an all-star game and they went hard.”

In the second game of the event, the West all-stars defeated the East 126-115. Bishop Ireton’s Patrick Moseh produced a double-double for the West, scoring 18 points and grabbing 12 rebounds.

Moseh played his freshman season at Lee High School before transferring to the Alexandria private school. He will play college basketball for Wheeling Jesuit University.

“I thought I was rusty but I think I did a good job,” Moseh said. “… When I was a freshman, I never imagined I’d be here. I think the transition to the WCAC … helped me be more aggressive.”

NBA stars such as LeBron James, Dwight Howard and Carmelo Anthony have participated in the Capital Classic, along with Hall of Famers Michael Jordan and Magic Johnson.